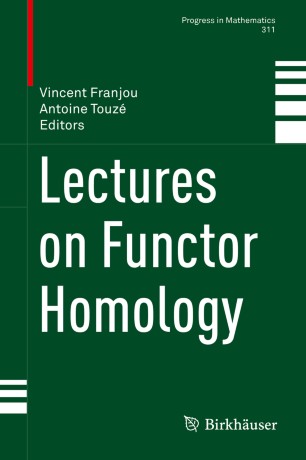 Part of the Progress in Mathematics book series (PM, volume 311)

This book features a series of lectures that explores three different fields in which functor homology (short for homological algebra in functor categories) has recently played a significant role. For each of these applications, the functor viewpoint provides both essential insights and new methods for tackling difficult mathematical problems.

In the lectures by Aurélien Djament, polynomial functors appear as coefficients in the homology of infinite families of classical groups, e.g. general linear groups or symplectic groups, and their stabilization. Djament’s theorem states that this stable homology can be computed using only the homology with trivial coefficients and the manageable functor homology. The series includes an intriguing development of Scorichenko’s unpublished results.

The lectures by Wilberd van der Kallen lead to the solution of the general cohomological finite generation problem, extending Hilbert’s fourteenth problem and its solution to the context of cohomology. The focus here is on the cohomology of algebraic groups, or rational cohomology, and the coefficients are Friedlander and Suslin’s strict polynomial functors, a conceptual form of modules over the Schur algebra.

homotopy and homology of topological spaces, through derived functors of polynomial functors. In this regard the functor framework makes better use of naturality, allowing it to reach calculations that remain beyond the grasp of classical algebraic topology.

The links between functor homology and the three fields mentioned above offer compelling arguments for pushing the development of the functor viewpoint. The lectures in this book will provide readers with a feel for functors, and a valuable new perspective to apply to their favourite problems.

A. Djament is a CNRS researcher at the LMJL in Nantes. He studies functors categories and homological stability of infinite families of classical groups.

W. van der Kallen is a retired professor at the Mathematical Institute of Utrecht University. He is interested in representations of algebraic groups.

R. Mikhailkov is a researcher at the Steklov Institute of Mathematics in St-Petersburg. His interests include group theory, topology, category theory, and algebraic K-theory.

A. Touzé holds a CNRS/Université Paris 13 chair as a Maître de Conférences at the LAGA. He is interested in algebraic groups, homological algebra, and algebraic topology.