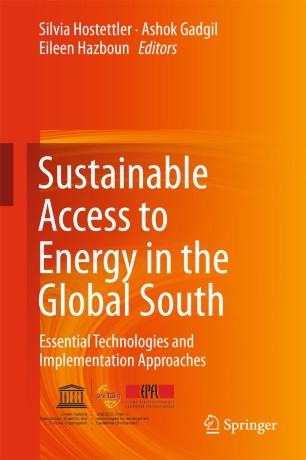 Presenting the best papers of the 3rd EPFL-UNESCO Chair Conference on Technologies for Development, this publication offers a valuable collection of innovative case studies exploring access to energy and renewable energy technologies in the Global South. It investigates the key determinants for successfully providing energy to resource-poor communities, and examines a wide range of technologies for energy production, distribution, storage and efficient use. Taken together, these case studies deal with the entire life cycle of products and solutions, as well as the complete value chain including all relevant stake holders. The collection also draws upon empirical research conducted in Africa and South America to present critical perspectives on women’s access to technologies in the renewable sector. This publication serves as a bridge between engineers, economists, and other scientists involved in research on the interface between technology and human, social and economic development. It also provides a valuable resource to academics and researchers of the natural sciences, computer science, information management, quantitative social sciences and business studies.

Silvia Hostettler is Deputy Director of the Center for Development and Cooperation at the Ecole Poyltechnique Fédéral de Lausanne (EPFL). She studied Tropical Environmental Science at the University of Aberdeen followed by a postgraduate course on development studies with EPFL which took her to Burkina Faso for six months. Upon returning from Africa, she started working with IUCN – The World Conservation Union at IUCN headquarters in Gland. In 2001, she was recruited as Research Programme Coordinator at EPFL in the framework of the Swiss National Centre of Competence in Research North-South. At the same time, she fulfilled a mandate for backstopping regional workshops in Ethiopia, Kenya, Cuba, Bolivia, Nepal and Vietnam. In 2007, she obtained her PhD from EPFL. From 2008 to 2012 she was based in Bangalore, India as Executive Director of swissnex, a Swiss House for Science facilitating research collaboration between Switzerland and India. Since September 2012 she is again based at EPFL where she is responsible for coordinating research activities and for the UNESCO Chair in Technologies for Development Conference. She is also in charge of education courses offered by CODEV at EPFL and gives lectures in the field of cooperation and development, in particular on the development potential of technologies and innovation in the global South.

Ashok Gadgil is the Director of the Environmental Energy Technologies Division at LBNL and Professor of Civil and Environmental Engineering at University of California Berkeley. Dr. Gadgil holds a Ph.D. in Physics from UCB and an M.Sc. in Physics from IIT/Kanpur. He has won numerous awards and honors for his inventions, including the Heinz Award for the Environment (2009), “Sustainability Pioneer Award” from SAG/SAM of Zurich (2010), The European Inventor Award, and the NCIIA Lifetime Award for teaching innovation (both 2011), and the Zayed Future Energy Prize, and the Lemelson-MIT Global Innovation Award (both

2012). He specializes in heat transfer, fluid dynamics, and design for development. He also has substantial experience in technical, economic, and policy research on energy efficiency and its implementation – particularly in developing countries. He has several inventions in the realm of sustainable development, including the Berkeley-Darfur Stove (which is being deployed in Darfur by the nonprofit Potential Energy) and “UV Waterworks,” a technology to inexpensively disinfect drinking water in the developing countries.

Eileen Hazboun is of Palestinian/Jordanian origin, born in the Sudan with extensive international exposure: living in Switzerland, Australia, the United States, countries of South East Asia (Cambodia, Laos, Thailand, Philippines) and the South Pacific (Solomon Islands, Vanuatu). Eileen has experience in human resources working with Ernst & Young in Los Angeles; PR/Communications with the World Business Council of Sustainable Development at the time of the 1992 UN Conference on Environment and Development in Brazil; fundraising and humanitarian aid with the United Nations Office for the Coordination of Humanitarian Affairs and the management of the global ticketing logistics and supply chain activities at the International Air Transport Association, prior to the implementation of electronic ticketing. Since January 2010, she has been working in CODEV as the Coordinator for the UNESCO Chair in Technologies for Development as well as the CAS in Management of Development Projects and the CAS in Disaster Risk Reduction. Eileen holds a BA in Humanities from Griffith University in Brisbane, Australia and an MBA from the University of Geneva. Eileen is multi-lingual speaking English, French and Arabic.