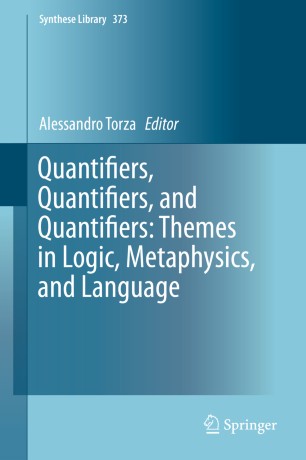 This volume covers a wide range of topics that fall under the 'philosophy of quantifiers', a philosophy that spans across multiple areas such as logic, metaphysics, epistemology, and even the history of philosophy. It discusses the import of quantifier variance in the model theory of mathematics. It advances an argument for the uniqueness of quantifier meaning in terms of Evert Beth’s notion of implicit definition, and clarifies the oldest explicit formulation of quantifier variance: the one proposed by Rudolf Carnap.

The volume further examines what it means that a quantifier can have multiple meanings, and addresses how existential vagueness can induce vagueness in our modal notions. Finally, the book explores the role played by quantifiers with respect to various kinds of semantic paradoxes, the logicality issue, ontological commitment, and the behavior of quantifiers in intensional contexts. ​

Alessandro Torza received his Ph.D. in philosophy from Boston University. He is currently an Associate Research Fellow at the National Autonomous University of Mexico (UNAM). He works in metaphysics and neighboring areas, especially the philosophy of logic and language.