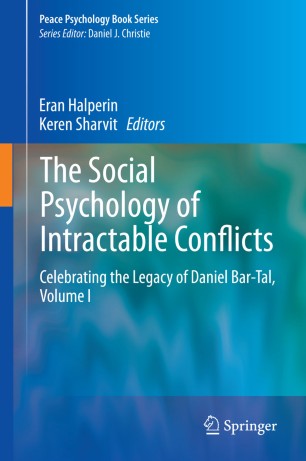 The Social Psychology of Intractable Conflicts

Celebrating the Legacy of Daniel Bar-Tal, Volume I

Containing chapters by many leading social, political, and peace psychologists, this volume demonstrates the influence and contribution of Dr. Bar-Tal’s work to recent developments in the study of the social-psychological aspects of intractable conflicts. It explores the contents of the socio-psychological infrastructure, the processes through which these contents are acquired and maintained, their functions, the societal mechanisms that contribute to their institutionalization, as well as their role in the crystallization of social identity and development of a culture of conflict. Significantly, intractable conflict is presented here as a system of processes that reinforce each other and support the pathological growth of the conflict.

By demonstrating that it can be applied to various kinds of intractable conflicts in various places of the world, the volume argues that the theory is transferable and universal. Moreover, the volume aims to exhibit new connections and integrations between Dr. Bar-Tal's theories and other prominent theoretical frameworks in social and political psychology. Presenting both a comprehensive overview of works that have been influenced by Dr. Bar-Tal's theories and research, as well as a wide gate to future studies that will connect Dr. Bar-Tal’s work to recent theoretical developments in related domains, Understanding the Social Psychology of Intractable Conflicts: Celebrating the Legacy of Daniel Bar Tal is an important text for all those interested in developing a sustainable, peaceful world.