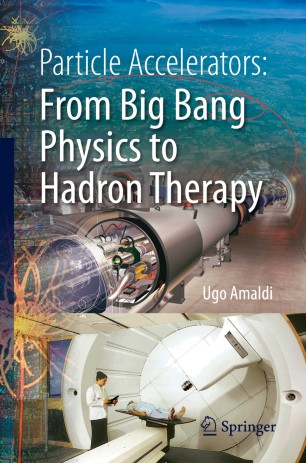 Rather than focusing on the contributions of theoretical physicists to the understanding of the subatomic world and of the beginning of the universe - as most popular science books on particle physics do - this book is different in that, firstly, the main focus is on machine inventors and builders and, secondly, particle accelerators are not only described as discovery tools but also for their contributions to tumour diagnosis and therapy. The characters of well-known (e.g. Ernest Lawrence) and mostly unknown actors (e.g. Nicholas Christofilos) are outlined, including many colourful quotations. The overall picture supports the author’s motto: “Physics is beautiful and useful”.

“Accelerators go all the way from the unique and gargantuan Large Hadron Collider to thousands of smaller versions in hospitals and industry. Ugo Amaldi has experience across the range. He has worked at CERN and has for many years been driving the application of accelerators in medicine. This is a must-read introduction to this frontier of modern technology, written beautifully by a world expert.”

Frank Close, Professor of Physics at Oxford University
author of "The Infinity Puzzle"

“This book should be read by school teachers and all those interested in the exploration of the microcosm and its relation to cosmology, and in the use of accelerators for medical applications. With a light hand and without formulae the

author easily explains complicated matters, spicing up the text with amusing historical anecdotes. His reputation as an outstanding scientist in all the fields treated guarantees high standards.”

“This book tells the story of modern physics with an unusual emphasis on the machine-builders who made it all possible, and their machines.  Learning to accelerate  particles has enabled physicists to probe the subatomic world and gain a deeper understanding of the cosmos.  It has also brought numerous benefits to medicine, from the primitive X-ray machines of over a century ago to today's developments in hadron therapy for cancer.  Amaldi tells this story in a most fascinating way.”

Edward Witten, Professor of  Mathematical Physics at the Institute for Advanced Study in Princeton; Fields Medal (1990)