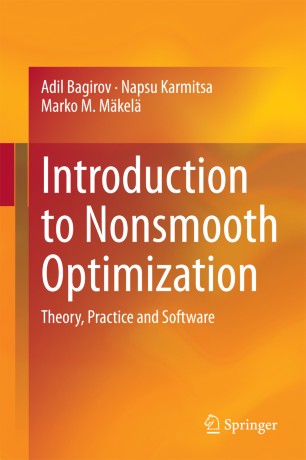 This book is the first easy-to-read text on nonsmooth optimization (NSO, not necessarily diﬀerentiable optimization). Solving these kinds of problems plays a critical role in many industrial applications and real-world modeling systems, for example in the context of image denoising, optimal control, neural network training, data mining, economics, and computational chemistry and physics. The book covers both the theory and the numerical methods used in NSO, and provides an overview of diﬀerent problems arising in the ﬁeld. It is organized into three parts:

1.convex and nonconvex analysis and the theory of NSO;

3.a guide to NSO software.

The book is ideal for anyone teaching or attending NSO courses. As an accessible introduction to the ﬁeld, it is also well suited as an independent learning guide for practitioners already familiar with the basics of optimization.

A.M. Bagirov received a master degree in Applied Mathematics from Baku State University, Azerbaijan in 1983, and the Candidate of Sciences degree in Mathematical Cybernetics from the Institute of Cybernetics of Azerbaijan National Academy of Sciences in 1989 and PhD degree in Optimization from Federation University Australia (formerly the University of Ballarat), Ballarat, Australia in 2002. He worked at the Space Research Institute (Baku, Azerbaijan), Baku State University (Baku, Azerbaijan), Joint Institute for Nuclear Research (Moscow, Russia). Dr. Bagirov is with Federation University Australia (Ballarat, Australia) since 1999. He currently holds the Associate Professor position at this university. He has won four Australian Research Council Discovery and Linkage grants to conduct research in nonsmooth and global optimization and their applications. He was awarded Australian Research Council Postdoctoral Fellow and Australian Research Council Research Fellow. His main research interests are in the area of nonsmooth and global optimization and their applications in data mining, regression analysis and water management. Dr. Bagirov has published more than one hundred journal papers, book chapters and papers in conference proceedings.

Napsu Karmitsa has been a Docent (Adjunct Professor) of Applied Mathematics at the Department of Mathematics and Statistics at the University of Turku, Finland, since 2011. She obtained her MSc decree in Organic Chemistry in 1998 and PhD degree in Scientific Computing in 2004 both from the University of Jyväskylä, Finland. At the moment, she holds a position of a postdoctoral fellow at the University of Turku. Her research is focused on nonsmooth optimization and analysis. Special emphasis is given to nonconvex, global and large-scale cases. She is also studying theory of generalized pseudo and quasiconvexities for nonsmooth functions and developing numerical methods for solving nonsmooth possible nonconvex and large-scale optimization problems.

Marko M. Mäkelä currently holds the full professorship in Applied Mathematics at the University Turku, Finland. He is also a vice head of the Department of Mathematics and Statistics at the University of Turku. He obtained his MSc degree in Applied Mathematics in 1986 and PhD degree in Scientific Computing in 1990 both from the University of Jyväskylä, Finland. He still holds a Docent (Adjunct Professor) position at the University of Jyväskylä. Prof. Mäkeläs’ research is focused mainly on nonsmooth analysis and optimization. Special emphasis has been on nonsmooth and nonconvex analysis including optimality conditions and the theory of generalized (pseudo- and quasi-) convexities, together with designing numerical methods for nonsmooth nonconvex optimization, where the focus is on efficient implementation of these solution methods. In addition, his research interests include mixed integer nonlinear programming, multiobjective optimization, in particular interactive method, metaheuristics in global optimization and industrial applications. He is one of the developers of the interactive NIMBUS-method for multiobjective optimization working via the Internet. Furthermore, his previous book on Nonsmooth Optimization (World Scientific, 1992) coauthored with prof. Pekka Neittaanmäki has been one major textbook in the area of nonsmooth analysis and optimization.

“This textbook can be useful for students to gain a panoramic view of the theory of nonsmooth optimization and of several practical applications that result in nondifferentiable optimization problems. The guide on numerical methods and software description in the final part can mostly be seen as a pointer to other books or articles with details and explanations.” (Claudia A. Sagastizábal, Mathematical Reviews, February, 2016)