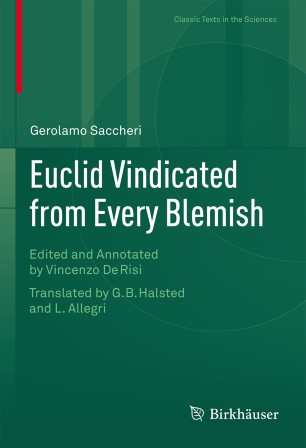 Part of the Classic Texts in the Sciences book series (CTS, volume 1)

This first complete English language edition of Euclides vindicatus presents a corrected and revised edition of the classical English translation of Saccheri's text by G.B. Halsted. It is complemented with a historical introduction on the geometrical environment of the time and a detailed commentary that helps to understand the aims and subtleties of the work.

Euclides vindicatus, written by the Jesuit mathematician Gerolamo Saccheri, was published in Milan in 1733. In it, Saccheri attempted to reform elementary geometry in two important directions: a demonstration of the famous Parallel Postulate, and the theory of proportions. Both topics were of pivotal importance in the mathematics of the time. In particular, the Parallel Postulate had escaped demonstration since the first attempts at it in the Classical Age, and several books on the topic were published in the Early Modern Age. At the same time, the theory of proportion was the most important mathematical tool of the Galilean School in its pursuit of the mathematization of nature. Saccheri's attempt to prove the Parallel Postulate is today considered the most important breakthrough in geometry in the 18th century, as he was able to develop for hundreds of pages and dozens of theorems a system in geometry that denied the truth of the postulate (in the attempt to find a contradiction). This can be regarded as the first system of non-Euclidean geometry. Its later developments by Lambert, Bolyai, Lobachevsky and Gauss eventually opened the way to contemporary geometry.

Occupying a unique position in the literature of mathematical history, Euclid Vindicated from Every Blemish will be of high interest to historians of mathematics as well as historians of philosophy interested in the development of non-Euclidean geometries.