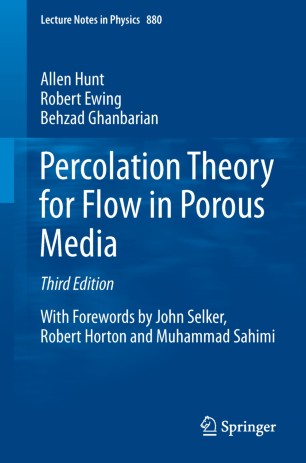 This monograph presents, for the first time, a unified and comprehensive introduction to some of the basic transport properties of porous media, such as electrical and hydraulic conductivity, air permeability and diffusion. The approach is based on critical path analysis and the scaling of transport properties, which are individually described as functions of saturation. At the same time, the book supplies a tutorial on percolation theory for hydrologists, providing them with the tools for solving actual problems. In turn, a separate chapter serves to introduce physicists to some of the language and complications of groundwater hydrology necessary for successful modeling. The end-of-chapter problems often indicate open questions, which young researchers entering the field can readily start working on. This significantly revised and expanded third edition includes in particular two new chapters: one on advanced fractal-based models, and one devoted to the discussion of various open issues such as the role of diffusion vs. advection, preferential flow vs. critical path, universal vs. non-universal exponents for conduction, and last but not least, the overall influence of the experimental apparatus in data collection and theory validation. "The book is suitable for advanced graduate courses, with selected problems and questions appearing at the end of each chapter. [...] I think the book is an important work that will guide soil scientists, hydrologists, and physicists to gain a better qualitative and quantitative understanding of multitransport properties of soils." (Marcel G. Schaap, Soil Science Society of America Journal, May-June, 2006)

“This is the third edition of the book of A. G. Hunt … . The main aim is the study of connectivity and correlations as the main explanation of the properties of flows in porous media. … This book could be very useful to physicists, hydrologists and students who wish to understand the complexity of the flows in porous media. Specific problems and significant reference lists are given at the end of each chapter.” (Gelu Paşa, zbMATH, Vol. 1300, 2015)
Buy options