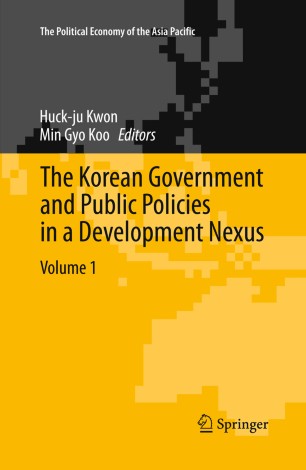 The Korean Government and Public Policies in a Development Nexus, Volume 1

Part of the The Political Economy of the Asia Pacific book series (PEAP, volume 13)

In the postwar period, Korea’s economic and social-political metamorphosis is a rare example of a successful transition from one of the world’s poorest developing countries to a highly sophisticated industrial society—an experience which many developing countries are keen to emulate.  The change is particularly significant as Korea was able to reduce poverty and keep social inequality at a modest level during its rapid economic development. This volume analyzes the Korean transition in regards to the political and institutional foundation of its government and public policies.  The government of Korea single-mindedly carried out public policies to stimulate economic growth, but the government and public policies have themselves been affected and changed by the process.  The contention of this volume is that the transition of Korean society and the evolution of the Korean government are the results of two-way interactions.  In this context, the volume analyzes the way in which the dynamics of public administration were shaped within the Korean government and the kinds of public policies and instruments that were adopted to encourage this economic and social development.  This analysis will allow a more complete understanding of the economic and social transformation of Korea.  Surprisingly, there is a paucity of research on this aspect—a gap which this volume seeks to fill.  This volume shows that it is necessary to maintain consistency and coherence in government and public policy in order to achieve economic and social transformation, making it of interest to both scholars and policy-makers concerned with development in the Asia-Pacific.