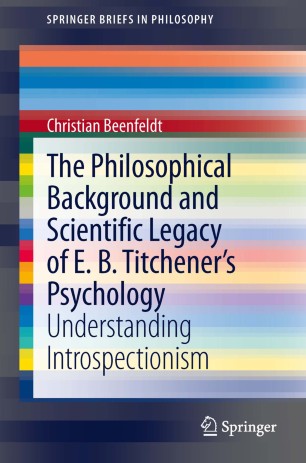 The Philosophical Background and Scientific Legacy of E. B. Titchener's Psychology

​This volume offers a new understanding of Titchener’s influential system of psychology popularly known as introspectionism, structuralism and as classical introspective psychology. Adopting a new perspective on introspectionism and seeking to assess the reasons behind its famous implosion, this book reopens and rewrites the chapter in the history of early scientific psychology pertaining to the nature of E. B. Titchener’s psychological system.

The book is divided into three parts. In Part I, British associationism is examined thoroughly. The author here discusses the psychology of influential empiricist philosophers such as Thomas Hobbes, John Locke, David Hume, David Hartley, James Mill, and John Stuart Mill. In Part II of the book, Titchener’s introspectionist system of psychology is examined and analyzed. In Part III, the author argues that Titchener’s psychology should be understood as a form of associationism and explains how analysis, not introspection, was central to introspectionism.