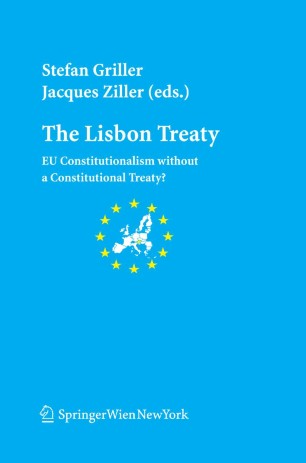 Immediately after the rejection of the Constitutional Treaty in France and in the Netherlands, I was tempted not to comply with a contract according to which I was expected to write on the Eu- pean Constitution within a very close deadline. “What is the sense of it now?” I tried to argue. “I cannot be obliged by a contract wi- out an object”. I was wrong at that time and we would be equally wrong now, should we read the Irish vote on the Lisbon Treaty and the Lisbon Treaty itself as the dead end for European constitutionalism. Let us never forget that the text rejected in May 2005 was not the founding act of such constitutionalism. To the contrary, it was nothing more than a remarkable passage in a long history of constitutional dev- opments that have been occurring since the early years of the Eu- pean Community. All of us know that the Court of Justice spoke of a European constitutional order already in 1964, when the primacy of Community law was asserted in the areas conferred from the States to the European jurisdiction. We also know that in the pre- ous year the Court had read in the Treaty the justiciable right of any European citizen to challenge her own national State for omitted or distorted compliance with European rules.

Catherine Barnard MA (Cantab), LLM (EUI), PhD (Cantab) is a Reader in EU Law at the University of Cambridge and a fellow of Trinity College. She also holds a Jean Monnet chair of European Law. She is co-director of the Centre for European Legal Studies at Cambridge.

José María Beneyto is Professor of International Law, European Law and International Relations at the Universidad San Pablo in Madrid. He is Director of the Institute for European Studies at that university and holds a Jean Monnet chair.

Hervé Bribosia is Head of research and scientific co-operation at the Centre Virtuel de la Connaissance sur l’Europe in Luxembourg, and Guest Professor at the University of Paris I (Panthéon-Sorbonne).

Dominic Coppens is Junior Member of the Leuven Centre for Global Governance Studies and Assistant at the Institute for International Law, Leuven University.

Paul Craig is Professor of English Law at the St. John’s College of the University of Oxford.

Stefan Griller is Jean Monnet-Professor for European Law at the Europainstitut of Wirtschaftsuniversität, Vienna. He was founding President of ECSA Austria in 1996 and since 2002 serves as its Secretary General. His paper was prepared during his stay as a Fernand Braudel Scholar at the EUI in Florence.

Marcel Kau holds a Ph.D. from Konstanz University and an LL.M. from Georgetown University. Currently he works on his habilitation in public law and is assistant researcher at the chair of Prof. Dr. Dr. h.c. Kay Hailbronner at the University of Konstanz/ Germany.

Christine Kaddous studied at Neuchâtel, Cambridge / UK and at the Free University of Brussels. She teaches EU Law at Geneva where she holds a Jean Monnet chair and is Director of the Centre d’études juridiques européennes. She publishes extensively on EU external relations.

Bart Meesters is Junior Member of the Leuven Centre for Global Governance Studies and Researcher at the Fund for Scientific Research-Flanders (FWO) and at the Institute for International Law, Leuven University.

Ernst-Ulrich Petersmann is Professor of International and European Law at the European University Institute, Florence, and Head of its Law Department.

Paolo Ponzano, EU official since 1971. Before, he assisted Ricardo Monaco at the University of Rome and Altiero Spinelli. He was Director for Relations with the Council, Director of the Task Force on the future of the Union, alternate member of the European Convention, Director for Institutional Affairs and Better Regulation and Senior Fellow at the RSCAS. Currently, he is the Principal Adviser to the Secretary General for Institutional Issues.

Antonio Sáinz de Vicuña is General Counsel of the European Central Bank in Frankfurt and Director of the Bank’s Legal Service.

Bruno de Witte is Professor of European Union law at the European University Institute in Florence.

Jan Wouters is Professor of International Law and International Organizations, Director, Leuven Centre for Global Governance Studies and Institute for International Law, Leuven University; Of Counsel, Linklaters, Brussels. His paper was prepared during his stay as a Fernand Braudel Scholar at the EUI in Florence.