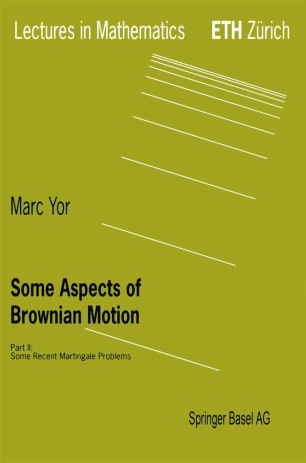 Some Aspects of Brownian Motion

The following notes represent approximately the second half of the lectures I gave in the Nachdiplomvorlesung, in ETH, Zurich, between October 1991 and February 1992, together with the contents of six additional lectures I gave in ETH, in November and December 1993. Part I, the elder brother of the present book [Part II], aimed at the computation, as explicitly as possible, of a number of interesting functionals of Brownian motion. It may be natural that Part II, the younger brother, looks more into the main technique with which Part I was "working", namely: martingales and stochastic calculus. As F. Knight writes, in a review article on Part I, in which research on Brownian motion is compared to gold mining: "In the days of P. Levy, and even as late as the theorems of "Ray and Knight" (1963), it was possible for the practiced eye to pick up valuable reward without the aid of much technology . . . Thereafter, however, the rewards are increasingly achieved by the application of high technology". Although one might argue whether this golden age is really foregone, and discuss the "height" of the technology involved, this quotation is closely related to the main motivations of Part II: this technology, which includes stochastic calculus for general discontinuous semi-martingales, enlargement of filtrations, . . .

"This is a formidable book, and is meant for the specialist...this book (together with Part I) can be very rewarding, imparting a very good insight into the subtelities of martinglae theory and stochastic calculus."

--The Journal of the Indian Inst. of Science

"All efforts are rewarded by acknowledgment with modern point of view on such a popular object as Brownian motion and on still open problems related to it." -Zeitschrift fur Mathematik