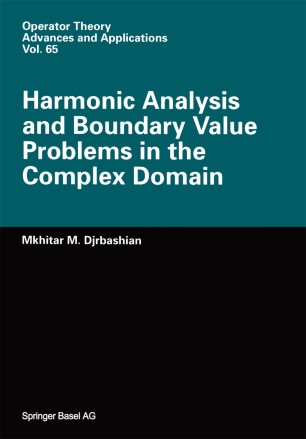 Harmonic Analysis and Boundary Value Problems in the Complex Domain

As is well known, the first decades of this century were a period of elaboration of new methods in complex analysis. This elaboration had, in particular, one char­ acteristic feature, consisting in the interfusion of some concepts and methods of harmonic and complex analyses. That interfusion turned out to have great advan­ tages and gave rise to a vast number of significant results, of which we want to mention especially the classical results on the theory of Fourier series in L2 ( -7r, 7r) and their continual analog - Plancherel's theorem on the Fourier transform in L2 ( -00, +00). We want to note also two important Wiener and Paley theorems on parametric integral representations of a subclass of entire functions of expo­ nential type in the Hardy space H2 over a half-plane. Being under the strong influence of these results, the author began in the fifties a series of investigations in the theory of integral representations of analytic and entire functions as well as in the theory of harmonic analysis in the com­ plex domain. These investigations were based on the remarkable properties of the asymptotics of the entire function (p, J1 > 0), which was introduced into mathematical analysis by Mittag-Leffler for the case J1 = 1. In the process of investigation, the scope of some classical results was essentially enlarged, and the results themselves were evaluated.