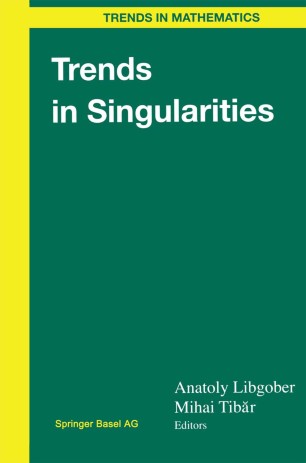 The collection of papers in this volume represents recent advances in the under­ standing of the geometry and topology of singularities. The book covers a broad range of topics which are in the focus of contemporary singularity theory. Its idea emerged during two Singularities workshops held at the University of Lille (USTL) in 1999 and 2000. Due to the breadth of singularity theory, a single volume can hardly give the complete picture of today's progress. Nevertheless, this collection of papers provides a good snapshot of what is the state of affairs in the field, at the turn of the century. Several papers deal with global aspects of singularity theory. Classification of fam­ ilies of plane curves with prescribed singularities were among the first problems in algebraic geometry. Classification of plane cubics was known to Newton and classification of quartics was achieved by Klein at the end of the 19th century. The problem of classification of curves of higher degrees was addressed in numerous works after that. In the paper by Artal, Carmona and Cogolludo, the authors de­ scribe irreducible sextic curves having a singular point of type An (n > 15) and a large (Le. , :::: 18) sum of Milnor numbers of other singularities. They have discov­ ered many interesting properties of these families. In particular they have found new examples of so-called Zariski pairs, i. e.