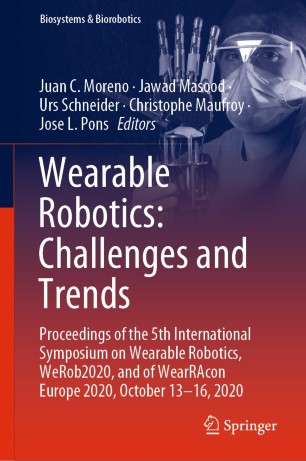 This book reports on advanced topics in the areas of wearable robotics research and practice. It focuses on new technologies, including neural interfaces, soft wearable robots, sensors and actuators technologies, discussing industrially and medically-relevant issues, as well as legal and ethical aspects. It covers exemplary case studies highlighting challenges related to the implementation of wearable robots for different purposes, and describing advanced solutions. Based on the 5th International Symposium on Wearable Robotics, WeRob2020, and on WearRacon Europe 2020, which were both held online on October 13-16, 2020, the book addresses a large audience of academics and professionals working in for the government, in the industry, and in medical centers, as well as end-users alike. By merging together engineering, medical, ethical and industrial perspectives, it offers a multidisciplinary, timely snapshot of the field of wearable technologies.