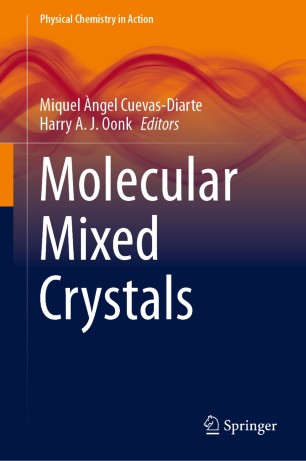 Part of the Physical Chemistry in Action book series (PCIA)

This book focuses on mixed crystals formed by molecular substances. The emphasis lies on the elucidation of the structural and thermodynamic properties of two-component systems. Thanks to the fact that the research efforts have been directed to a number of families of chemically coherent substances, rather than to a collection of isolated systems, the knowledge of mixed crystals has substantially increased. This is reflected by the discovery of several empirical relationships between thermodynamic properties, crystallographic properties, and also between thermodynamic mixing properties and exothermodynamic parameters, such as the structural mismatch between the components of the binary systems. This book is a benchmark for material scientists and a unique starting point for anyone interested in mixed crystals.

Miquel Àngel Cuevas-Diarte is an Emeritus Professor of Crystallography and Mineralogy at the University of Barcelona. He has taught crystallography, polymorphism, and phase equilibrium. He has worked on the storage of energy using molecular mixed crystals; on polymorphism and solid-state miscibility of food components. Apart from scientific papers, he has also published books on crystallography problems and the disclosure of the phenomenon of symmetry. He is the founder of the Molecular Alloys Group and for several years he has been the coordinator of the “Réseau Européen sur les Alliages Moléculaires” (REALM) program. He has been vice-rector of the University of Barcelona (1989-93) and Dean of the Faculty of Geology of the University of Barcelona (2005-09). In 1998 he received a special mention to the Barcelona City Price in Technological Research.

Harry A.J. Oonk is an Emeritus Professor of Thermodynamics at the Departments of Chemistry and Earth Sciences, at Utrecht University. He studied Chemistry, Physics and then continued with the completion of his PhD studies in Utrecht. He is the co-founder, and subsequently the director of the Chemical Thermodynamics Group. His research and teaching interest, as evidenced by scientific papers and textbooks, is Phase Theory: the thermodynamics of phase equilibria. He has a special interest in the formation of mixed crystals in inorganic (geological) and molecular materials. Since 2002, he is a Knight of the Order of the Netherlands Lion.