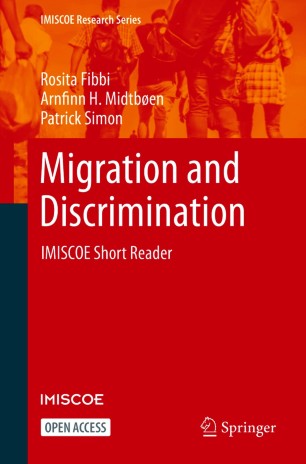 This open access short reader provides a state of the art overview of the discrimination research field, with particular focus on discrimination against immigrants and their descendants. It covers the ways in which discrimination is defined and conceptualized, how it is measured, how it may be theorized and explained, and how it might be combated by legal and policy means. The book also presents empirical results from studies of discrimination across the world to show the magnitude of the problem and the difficulties of comparison across national borders. The concluding chapter engages in a critical discussion of the relationship between discrimination and integration as well as pointing out promising directions for future studies.  As such this short reader is a valuable read to undergraduate students, as well as graduate students, scholars, policy makers and the general public.

Rosita Fibbi is doctor in political science from the University of La Sapienza in Rome, with educational background also from Zurich and Geneva. She has taught Sociology of Migration at the Faculty of Social and Political Sciences at the University of Lausanne. She is senior researcher and project manager at the Swiss Forum for Migration and Population Studies at the University of Neuchâtel. After various research projects on the integration trajectories of children of immigrants, she published carried out the first field experiments of discrimination against children of immigrants in Switzerland, thus significantly contributing to put this topic on the political agenda in the country. Fibbi nourished this debate with further studies on antidiscrimination policy in the public and private sector. She currently heads a large project on discrimination in Switzerland, in the frame of the NCCR on the move.

Dr. Arnfinn H. Midtbøen is an Associate Professor in sociology at the University of Oslo and a Research professor at the Institute for Social Research, also in Oslo, Norway. Midtbøen's research centers on immigration and integration, including topics such as employment discrimination, citizenship, descendants of migrants in education and work, and the history of migration research. Currently, he works on two large-scale projects on the integration of and discrimination against descendants of immigrants in Norway, and with colleagues in the US, the UK and the Netherlands he works on meta-analyses of audit studies of racial and ethnic discrimination in labor markets across the world. From 2014 to 2020, Midtbøen was member of the international IMISCOE network’s Board of Directors, and together with Rosita Fibbi and Patrick Simon he chairs the IMISCOE research cluster Discrimination in Cross-National Perspective.

Dr. Patrick Simon is Director of research at INED (Institut National d’Etudes Demographiques – National demographic institute, Paris, France) and is fellow researcher at the Center of European Studies (CEE) at Sciences Po. He is studying antidiscrimination policies, ethnic classification and the integration of ethnic minorities in European countries. He was the PI of the survey Trajectories and Origins undertaken in 2008-2009 by INED and INSEE and is co-coordinating the new survey TeO which will be conducted in 2019-2020. Simon will be chairing the department on integration and discrimination at the Institute for migrations from 2018. He is the co-editor of Sociétés Contemporaines and a member of the editorial committee of Ethnic and Racial Studies.