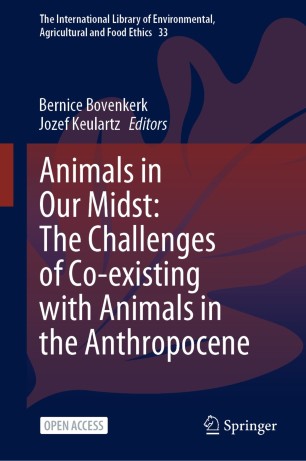 Animals in Our Midst: The Challenges of Co-existing with Animals in the Anthropocene

Part of the The International Library of Environmental, Agricultural and Food Ethics book series (LEAF, volume 33)

This Open Access book brings together authoritative voices in animal and environmental ethics, who address the many different facets of changing human-animal relationships in the Anthropocene. As we are living in complex times, the issue of how to establish meaningful relationships with other animals under Anthropocene conditions needs to be approached from a multitude of angles. This book offers the reader insight into the different discussions that exist around the topics of how we should understand animal agency, how we could take animal agency seriously in farms, urban areas and the wild, and what technologies are appropriate and morally desirable to use regarding animals. This book is of interest to both  animal studies scholars and environmental ethics scholars, as well as to practitioners working with animals, such as wildlife managers, zookeepers, and conservation biologists.

Bernice Bovenkerk is assistant professor of philosophy [from June 1, 2019 hopefully associate professor] at Wageningen University, the Netherlands. Her research and teaching deal with issues in animal and environmental ethics, the ethics of climate change, and political philosophy. Current topics are the moral status of animals and other natural entities, with a particular focus on fish and insects; animal agency; the ethics of animal domestication; animal (dis)enhancement; animals in the wild; and deliberative democracy.
She has obtained both a VENI and a VIDI innovative research grant from the Netherlands Organization of Scientific Research. The VENI dealt with animal domestication, in particular discussions around the justification of animal captivity, and changing animals’ genomes. In particular, she did research on the ethics of pedigree dog breeding. The VIDI deals with animal agency under Anthropocene conditions.
Bernice received her PhD from the University of Melbourne, Australia, on a dissertation titled The Biotechnology Debate. Democracy in the face of intractable disagreement. She received her Master’s title at the University of Amsterdam on a thesis titled Pluralism in Environmental Ethics. Together with Jozef Keulartz, she has edited the Springer volume Animal Ethic in the Age of Humans. Blurring boundaries in human-animal relationships. Her homepage is bernicebovenkerk.com.
Jozef Keulartz is Emeritus Professor of Environmental Philosophy at the Radboud University Nijmegen, and senior researcher Applied Philosophy at Wageningen University and Research Centre. He has published extensively in different areas of science and technology studies, social and political philosophy, bioethics, environmental ethics and nature policy. His books include Die verkehrte Welt des Jürgen Habermas [The Topsy-Turvy World of Jürgen Habermas, 1995] and Struggle for Nature—A Critique of Radical Ecology (1998). He is co-editor of
Pragmatist Ethics for a Technological Culture (Kluwer, 2002), Legitimacy in
European Nature Conservation Policy (Springer, 2008), New Visions of Nature
(Springer, 2009), Environmental Aesthetics. Crossing Divides and Breaking
Ground (Fordham University Press, 2014), and Old World and New World
Perspectives in Environmental Philosophy (Springer, 2014).