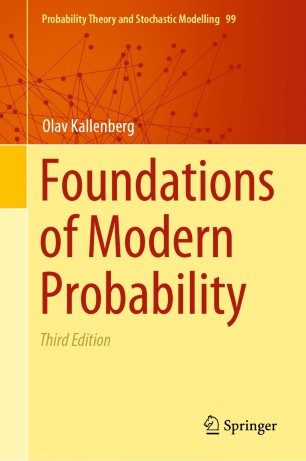 This new, thoroughly revised and expanded 3rd edition of a classic gives a comprehensive coverage of modern probability in a single book. It is a truly modern text, providing not only classical results but also material that will be important for future research. Much has been added to the previous edition, including eight entirely new chapters on subjects like random measures, Malliavin calculus, multivariate arrays, and stochastic differential geometry. Apart from important improvements and revisions, some of the earlier chapters have been entirely rewritten. To help the reader, the material has been grouped together into ten major areas, each arguably indispensable to any serious graduate student and researcher, regardless of their specialization.

Each chapter is largely self-contained and includes plenty of exercises, making the book ideal for self-study and for designing graduate-level courses and seminars in different areas and at different levels. Extensive notes and a detailed bibliography make it easy to go beyond the presented material if desired.

“…readers are likely to regard the book as an ideal reference. Indeed the monograph has the potential to become a (possibly even “the”) major reference book on large parts of probability theory for the next decade or more.” M. Scheutzow, zbMATH

“…great edifice of material, clearly and ingeniously presented, without any non-mathematical distractions. Readers … are in very capable hands.” F. B. Knight, Mathemtical Reviews

“… this is precisely what Professor Kallenberg has attempted … and he has accomplished it brilliantly... It is astonishing that a single volume of just over five hundred pages could contain so much material presented with complete rigor and still be at least formally self-contained..." R.K. Getoor, Metrika

“This … edition presents … more material in the concise and elegant style of the former edition which by now has become a highly praised standard reference book for many areas of probability theory.” M. Reiß, zbMATH

“… the … monograph is a modern classic in probability theory…  …every … expert in one of the various topics covered by this monograph will reconsider his own point of view and gain deeper insight into his subject.” Klaus D. Schmidt, Mathematical Reviews

Olav Kallenberg (Ph.D., Chalmers University, Gothenburg, Sweden, 1972) is an Emeritus Professor at Auburn University. He has held research positions in Sweden and abroad and taught in the US for more than 30 years. In 1977 he was awarded the Rollo Davidson Prize by Cambridge University, in 1989 he was elected a Fellow of the IMS, and in 1991–94 he served as the editor of PTRF. He has given plenary talks at major conferences all over the world, and was the opening lecturer at both the Vilnius Conference in 2006 and at the SPA Conference in Gothenburg in 2018. Apart from his numerous research papers, he is known for his Springer books Probabilistic Symmetries and Invariance Principles (2005) and Random Measures, Theory and Applications (2017). His book Foundations of Modern Probability (1997, 2002, and 2021) has become a classic reference work.