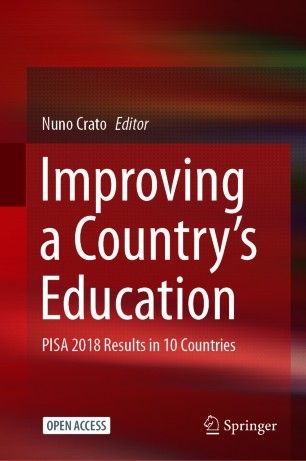 This open access book compares and contrasts the results of international student assessments in ten countries. The OECD’s Programme for International Student Assessment (PISA) released the results of its 2018 assessment in December 2019. This book reflects the debates that typically follow the release of these results and focuses on the causes of differences between countries. Such causes include continuous decline in one country, improvement combined with increasing internal inequalities in another country, or rapid improvement in spite of an outdated curriculum in yet another.

In addition, the book discusses a number of general questions: Is knowledge outdated? Are computers taking over and replacing teachers? Are schools killing creativity? Are we adequately preparing the next generation? Are schools failing to educate our kids? The book starts out with a summary of PISA’s evolution and PISA results, and an explanation of the major factors that play a role in changes in countries’ results. The next ten chapters are devoted to ten specific countries, offering a summary of data and an explanation of the major drives for changes in education results for each one. Each chapter includes a short description of the country’s educational system as well as the impact of PISA and other ILSA studies on the country’s educational policies. The chapters also include a timeline of policy measures and main hallmarks of the country’s educational evolution, discussing the impact of these measures on its PISA results. While highlighting the 2018 results, the book also takes into consideration previous results, as well as long-term initiatives.

Nuno Crato is a Professor of Mathematics and Statistics at the University of Lisbon. He was Portuguese Minister of Education from 2011 to 2015. During his tenure, compulsory schooling was extended, dropout rates were cut in half, and Portuguese students achieved the best results ever on PISA and TIMSS.

An active researcher, science writer, and educational essayist, he has received various honours, namely from the European Mathematical Society and the European Commission.