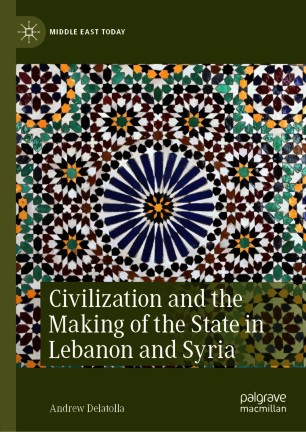 Civilization and the Making of the State in Lebanon and Syria

'Given the over-generalization and abstraction in the analysis of the state, Delatolla's archival analysis of Lebanon and Syria is needed and welcome. He also guides us through the widespread phenomenon of state failure when many Global South countries mimic the made-in-Europe "standard of civilization" template.'

'This highly original study is part of a wave of scholarship in the fields of Middle East studies, political science and international relations, that pushes these disciplines beyond their intellectually rigid and outdated boundaries. Standing on the shoulders of post-colonial and post-structuralist thinkers, Delatolla has brought together academic, extensive archival and governmental records to extract the colonial and imperial legacies embedded in state-based frameworks for organizing human societies. While a study of the intellectual coloniality reproduced in Lebanon and Syria, Delatolla’s strong analysis of power and critical framework is key to examining similar Eurocentric and state-centric models of governance in other Middle Eastern contexts.'

This book argues that the modern state, from the nineteenth century to the contemporary period, has consistently been used as a means to measure civilizational engagement and attainment. This volume historicizes this dynamic, examining how it impacted state-making in Lebanon and Syria. By putting social, political, and economic pressure on the Ottoman Empire to replicate the modern state in Europe, the book examines processes of racialization, nationalist development, continued imperial expansion, and resistance that became embedded in the state as it was assembled. By historicizing post-imperial and post-colonial state formation in Lebanon and Syria, it is possible to engage in a conceptual separation from the modern state, abandoning the ongoing reproduction of the state as a standard, or benchmark, of civilization and progress.

Andrew Delatolla is Lecturer in Middle Eastern Studies in the School of Languages, Cultures and Societies at the University of Leeds, UK.

Andrew Delatolla is Lecturer in Middle Eastern Studies in the School of Languages, Cultures and Societies at the University of Leeds, UK.