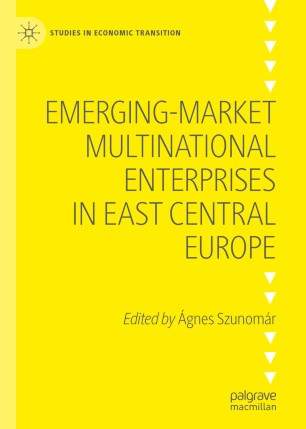 The rise of multinational enterprises (MNEs) from emerging markets is topical, important and poses a number of questions and challenges that require considerable attention in the future from academia as well as business management. The recent takeovers of high-profile companies in developed or developing countries by non-European emerging-market MNEs (EMNEs) – such as Lenovo, Wanhua (China), Hindalco (India), CVRD (Brazil), Cemex (Mexico), Lukoil (Russia), etc. – as well as the greenfield or brownfield investments of emerging companies (such as Huawei, ZTE, Tata, Pepco, etc.) show a new trend where new kind of firms become major players globally. EMNEs have become important players in several regions around the globe, ranging from the least developed countries of Africa through the developing markets in Latin America and Asia to the developed countries of the United States or the European Union, including East Central European (ECE) countries.

EMNEs presence on the global level has resulted in numerous studies in the international literature but those research results barely cover EMNEs’ activities in the ECE region (in the East Central European EU member countries, including the Czech Republic, Hungary, Poland, Slovakia and Slovenia). The existing books typically focus on the investment activity of a single country or region (such as China or East Asia) but a comprehensive analysis is still missing in this regard. The novelty of this edited volume is that it aims at exploring EMNEs location determinants, strategies, activities and challenges in East Central Europe by discussing its anomalies to the traditional theories as well as to other types of MNEs in the ECE region. The authors focus on EMNEs not only from China but from other important emerging countries, too, such as Russia, India, South Korea, Taiwan, Turkey, Brazil or South Africa.

Ágnes Szunomár, PhD, is the head of the Research Group on Development Economics at the Institute of World Economics, Centre for Economic and Regional Studies, Hungary. Her research focuses on East Asia, emerging markets as well as foreign direct investment issues and related policies in Central and Eastern Europe. She is also affiliated with Corvinus University of Budapest where she teaches courses on international economy and business. She led and participated in several international and Hungarian research projects, is a member of the European Cooperation in Science and Technology (COST) Action "China In Europe Research Network”, where she is the head of the Working Group on “Strategic sectors and infrastructure developments". She is also a member of China Observers in Central and Eastern Europe (CHOICE) network.