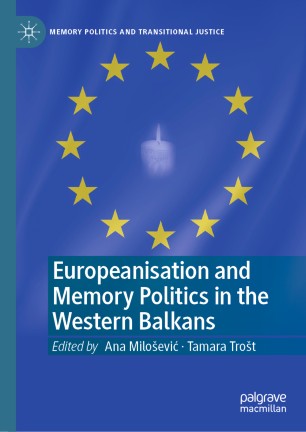 Europeanisation and Memory Politics in the Western Balkans

“This volume is an important contribution to debates about Europeanization, showcasing how European memory politics are appropriated and incorporated into local and national memory discourses. It sheds light not just on the Western Balkans, but Europeanization more broadly.”

“This is an impressive book that demonstrates how crucial the study of memory politics is for understanding European politics. Providing us with a complex understanding of Europeanization, the authors show how far-reaching the political effects can be of something as seemingly apolitical as ‘memories’.”

“This excellent and timely volume addresses truly transnational memory processes in the interplay between European institutions and memory entrepreneurs in new or prospective member states. This is a stimulating read and an important contribution to the research fields of memory politics, Europeanisation, and contemporary South Eastern Europe alike.”

– Tea Sindbaek, Associate Professor at the Department of Cross-Cultural and Regional Studies, University of Copenhagen, Denmark

This volume explores how the process of European integration has influenced collective memory in the countries of the Western Balkans. In the region, there is still no shared understanding of the causes (and consequences) of the Yugoslav wars. The conflicts of the 1990s but also of WWII and its aftermath have created “ethnically confined” memory cultures. As such, divergent interpretations of history continue to trigger confrontations between neighboring countries and hinder the creation of a joint EU perspective. In this volume, the authors examine how these “memory wars” impact the European dimension - by becoming a tool to either support or oppose Europeanisation. The contributors focus on how and why memory is renegotiated, exhibited, adjusted, or ignored in the Europeanisation process.

Ana Milošević is Researcher at the University of Leuven (KU Leuven), Belgium.

Tamara Trošt is Assistant Professor of Sociology at the University of Ljubljana, Slovenia.

Ana Milošević is Researcher at the University of Leuven (KU Leuven), Belgium.

Tamara Trošt is Assistant Professor of Sociology at the University of Ljubljana, Slovenia.

“This volume is an important contribution to debates about Europeanization. Through well researched case studies, it shows how European memory politics are appropriated and incorporated into local and national memory discourses. The contributions show how Europeanization has become a performance and is not transformative when it comes to memory politics. The insights of the chapters and coherent framework shed light not just on the Western Balkans, but contribute to a critical understanding of Europeanization more broadly.”

“Europeanisation and Memory Politics in the Western Balkans is an impressive book. By presenting a set of highly readable case studies, Milošević and Trošt demonstrate how crucial the study of memory politics is for a better understanding of European politics more generally. The focus is squarely on the countries of the former Yugoslavia, but the analysis, conclusions and ideas apply to a much larger area. The book also provides us with a complex understanding of Europeanization and shows how far-reaching the political effects can be of something as seemingly apolitical as ‘memories’. The Western Balkans form a rich field of study in their own right on this topic, but, as readers of this book will realize, they provide us also with a sharp lens through which we might see certain developments in the EU — and even elsewhere in the world — more clearly.”

“This excellent and timely volume explores the processes and practices of Europeanisation on cultures of memory, sites of memory, and memory politics in South Eastern Europe. Through its interdisciplinary and innovative approach, the volume addresses truly transnational memory processes in the interplay between European institutions and memory entrepreneurs in new or prospective member states. Crucially, the chapters foreground the roles of local memory actors and elites in the promotion, actualization and sometimes appropriation of “Europeanized memories” in the region, aspects that had received insufficient attention in the existing literature. This is a stimulating read and an important contribution to the research fields of memory politics, Europeanisation, and contemporary South Eastern Europe alike.”

– Tea Sindbaek, Associate Professor at the Department of Cross-Cultural and Regional Studies, University of Copenhagen, Denmark

“This book stands out for combining two fields that previously have not been combined: literature on Europeanisation and literature on Memory Politics. Especially the latter is still in its infancy and Milošević’s and Trošt’s contribution adds an important dimension to a still underdeveloped research area. The combination of the two different sets of literature is innovative and allows the different authors of this edited volume to ask new questions that so far have not been addressed in a systematic way.”

“Memory issues are abundant in contemporary European societies and take many shapes. As an in-depth analysis of the impact of EU norms of remembrance on a crucial but often forgotten region, the Western Balkans, this book brings the literature on Europeanization of memory politics to a new dimension. Unlike many studies focused on the East-West mnemonic divide, inspired empirical studies highlight the peculiarities of memory struggles in national contexts marked by the legacies of the Yugoslav wars, unresolved statehood issues and competing external influences. They provide a strong contribution to the study of the state and non-state actors involved in memorialization processes in post-socialist Europe, with their specific political agendas and strategies of legitimization in national and transnational arenas. This ambitious volume paints a complex picture of the power asymmetries at the core of contemporary memory battles, which account for diverging interpretations of Europe’s painful pasts.”

“In this groundbreaking volume, Milošević and Trošt explain how dealing with the past is a functional prerequisite for EU membership. In the Western Balkans there is still no common understanding of the roots, consequences and outcome of not only the most recent ethnic wars led throughout the territory of former Yugoslavia in the 1990s, but also with regard to the Second World War and its aftermath. Theoretically innovative and empirically rich, this book offers a comprehensive and comparative study of how politicizing memory affects not only relations between neighboring states in the region, but also their efforts vested in the EU accession processes.”

“This dynamic collection of case studies on the Western Balkans builds upon the results of regional memory politics research over the past decade and adds a European level in analyzing transnational and supranational processes of memorialization. Comprehensive in its geographical scope and ambitious in its theoretical contributions to the field of memory studies, this volume is essential reading for scholars and policy makers seeking to understand bottom-up and top-down mnemonic strategies, actors, and relationships from the memory sites of Southeastern Europe to the institutions of the European Union.”

– Vjeran Pavlaković, Associate Professor of Cultural Studies at the Faculty of Philosophy, University of Rijeka, Croatia

“The Old Bridge in Mostar, a masterpiece of Ottoman architecture, stood for 427 years before it was destroyed in 1993 during the war in Bosnia and Hercegovina. There was no military purpose for this, the overt intention was to erase whatever there was to remind of the existence of the foe’s historic memory. Much in the same manner, with the intention not only to annihilate its inhabitants but also to rub out their material cultural memory, the ancient Adriatic city of Dubrovnik was bombarded mercilessly for many days. The warlord who committed this barbaric act later unbelievably said: “We shall rebuild it, even older and more beautiful”. Who wants to understand the logic and the political goals of such lunacy, which is an intrinsic feature of identity politics and conflicts, is well advised to study the eleven chapters of this book. Only on the basis of understanding the purpose of the wars against memory, one can also understand why attempts, also explained in this book, to impose top-down memory norms fostered by the EU more often than not produce additional conflicts.”