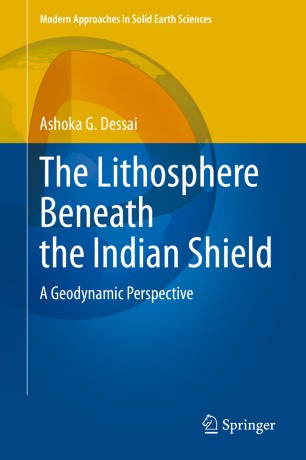 The Lithosphere Beneath the Indian Shield

This book explores the geotectonic evolution of the lithosphere beneath the Indian Shield, which comprises a collage of cratons variously bounded by mobile belts and palaeo-rifts. The lithosphere beneath these is fairly thin compared to other cratons worldwide, petrologically varied and shows considerable variation in thickness with depth both intra-craton and among cratons. Moreover, it has been subjected to the influence of repeated magmatic episodes from Proterozoic to Palaeocene, which have variously impacted different parts of the shield. The thermotectonic influence on constituent cratons is variable depending on the evolutionary history. This book discusses the impact of successive tectonomagmatic events on the evolution of the deep crust and shallow mantle, and their Phanerozoic modification as gleaned through the xenolith window.

The book provides a petrotectonic perspective on the deep crust and shallow mantle from direct samples brought up as xenoliths of deep lithologies, and offers a comprehensive overview for students, researchers, academics and professionals, integrating the results of petrological studies of deep lithologies and geophysical investigations to (i) shed light on the physico-chemical and thermal structure of the lithosphere from an array of geotectonic settings and (ii) gain insights into the spatio-temporal  evolution of the Indian Shield.

An in-depth guide critical thinking on the complex issue of mantle differentiation, magmatism, lithosphere modification and crustal growth over time, the book allows readers to gain a better understanding of the processes that affect the lithosphere and shape the crust on which we live.

Prof. Dr. Dessai has authored two books: (i) Geology and Mineral Resources of Goa, New Delhi Publishers, and (ii) Goa: Geology, Industry and Environment (in press), Publisher: Directorate of Art and Culture, Govt. of Goa. He has also delivered lectures at several universities and professional organisations and research institutes in India and abroad.

He has worked in wide variety of terrains, such as ophiolites of Ladakh Himalaya, Precambrian layered complexes and komatiitic ultramafites of South India, Deccan Traps of western India, including Precambrian iron and manganese ores, chromites, and laterites and bauxites. He has participated in an Indian Ocean expedition for prospecting of polymetallic nodules.

Prof. Dr. Dessai has served as the Dean of the Faculty of Pure Sciences and Registrar of Goa University.