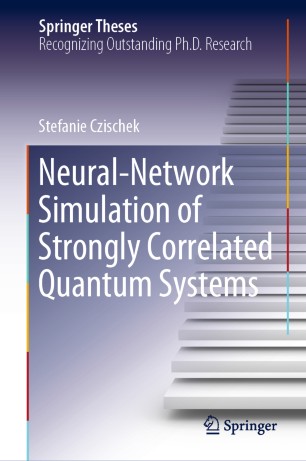 Quantum systems with many degrees of freedom are inherently difficult to describe and simulate quantitatively. The space of possible states is, in general, exponentially large in the number of degrees of freedom such as the number of particles it contains. Standard digital high-performance computing is generally too weak to capture all the necessary details, such that alternative quantum simulation devices have been proposed as a solution. Artificial neural networks, with their high non-local connectivity between the neuron degrees of freedom, may soon gain importance in simulating static and dynamical behavior of quantum systems. Particularly promising candidates are neuromorphic realizations based on analog electronic circuits which are being developed to capture, e.g., the functioning of biologically relevant networks. In turn, such neuromorphic systems may be used to measure and control real quantum many-body systems online. This thesis lays an important foundation for the realization of quantum simulations by means of neuromorphic hardware, for using quantum physics as an input to classical neural nets and, in turn, for using network results to be fed back to quantum systems. The necessary foundations on both sides, quantum physics and artificial neural networks, are described, providing a valuable reference for researchers from these different communities who need to understand the foundations of both.

Stefanie Czischek graduated from Heidelberg University, Germany, with a B.Sc. in Physics in 2013. In her research project, she used classical spin-glass models for simulating starling flocks. At the Kirchhoff-Institute for Physics, she studied the dynamics of quantum many-body systems far from equilibrium. She graduated with a M.Sc. in Physics in 2016. Stefanie received her Doctor of Natural Sciences at Heidelberg University in 2019. She worked with Professor Thomas Gasenzer on investigating artificial neural networks for simulating spin systems and realizing the emulation of quantum states on neuromorphic hardware. Stefanie is currently a postdoctoral researcher in the group of Professor Roger Melko at the University of Waterloo, Canada, where she continues working on simulating quantum many-body systems with the help of neural networks and an accelerating hardware.