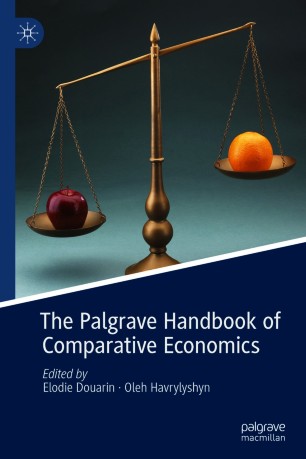 The Palgrave Handbook of Comparative Economics

“A book full of insights on economic systems and how to transit from one to another. A good Reference Manual for academics and policy-oriented researchers, with many useful tools to understand our changing world.”

“An invaluable guide to the post-communist economic transition and to the research it inspired, by a range of the leading experts from academia and policy circles.”

“This volume is another proof, if you needed one, that the comparative perspective enormously enriches the social sciences. The volume thankfully brings together scholars with very different approaches allowing the reader to make up his or her own mind about their usefulness in explaining observations and helping us improve the world.”

This book aims to define comparative economics and to illustrate the breadth and depth of its contribution. It starts with an historiography of the field, arguing for a continued legacy of comparative economic systems, which compared socialism and capitalism, a field which some argued should have been replaced by institutional economics after the fall of the Berlin Wall. The process of transition to market capitalism is reviewed, and itself exemplifies a new combination of comparative analysis with a focus on institutional development. Going beyond, chapters broadening the application of comparative analysis and applying it to new issues and approaches, including the role and definition of institutions, subjective wellbeing, inequality, populism, demography, and novel methodologies. Overall, comparative economics has evolved in the past 30 years, and remains a powerful approach for analyzing important issues.

Oleh Havrylyshyn, Adjunct Research Professor at Carleton University, Canada, has a diverse career including Academia; Government (Deputy Minister of Finance, Ukraine); IMF senior official, advisor in many countries. His numerous writings on transition have been widely cited; the most recent Present at the Transition reflects personal insights on thirty years of post-communism.

Elodie Douarin is Lecturer in Economics at the School of Slavonic and East European Studies at UCL. She was the director of the Centre for Comparative Studies of Emerging Economies from 2016 to 2019. She holds a PhD in Economics from Wye College (Imperial College), University of London, UK.