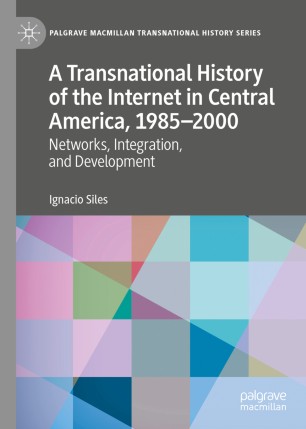 A Transnational History of the Internet in Central America, 1985–2000

This Palgrave Pivot analyzes how six countries in Central America—Costa Rica, El Salvador, Guatemala, Honduras, Nicaragua and Panama—connected to and through computer networks such as UUCP, BITNET and the Internet from the 80s to the year 2000. It argues that this story can only be told from a transnational perspective. To connect to computer networks, Central America built a regional integration project with great implications for its development. By revealing the beginnings of the Internet in this part of the world, this study broadens our understanding of the development of computer networks in the global south. It also demonstrates that transnational flows of knowledge, data, and technologies are a constitutive feature of the historical development of the Internet.

Ignacio Siles is a professor of media and technology studies in the School of Communication, and a researcher in the Centro de Investigación en Comunicación (CICOM) at the University of Costa Rica. He is the author of Networked Selves: Trajectories of Blogging in the United States and France (2017) and Por un sueño en.red.ado: Una historia de Internet en Costa Rica (2008).