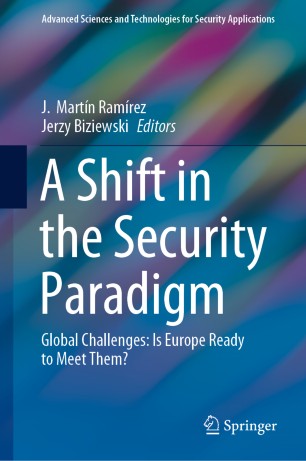 A Shift in the Security Paradigm

Global Challenges: Is Europe Ready to Meet Them?

This book discusses some of the strategic lines in front of the trends related to the new challenges of global security in this new century: some rather universal problems (migration,  terrorism, cyberspace, conflict resolutions techniques in prisons, economic intelligence), as well as more military ones (new conflicts: new world stage, new weapons, new military doctrines, mass destruction weapons and nuclear arms control, outer space and ocean depths), without forgetting some global and conceptual topics (disintegration is driving insecurity, searching for quality in international affairs, shield of security culture through data protection, information society and the protective influence of security culture).

A special focus is put on Europe's interests. The unique, complex process of integration of European states is confronted by various problems caused by the implementation of different political visions presented by the factions of the European Union's establishment. The diverse interpretation of the goals and paths of development of this organization leads to the violation of its cohesion, which is used by global partners with the opportunity to broaden their influence and achieve their own goals by playing European countries individually. There is a need for the EU to go further to achieve a deeper level of integration and strategic autonomy which would allow for the implementation of a coherent policy towards the powers.

1)   J. Martín Ramírez, born in Madrid, at the present, is Chair of the Center for Conflict Studies at Universidad Nebrija and of CICA International and of the Spanish Pugwash Movement (Peace Nobel Price 1995). He studied Medicine, Humanities, and Law, obtaining a PhD degree in Medicine and Surgery (Neurosciences) and in Philosophy (Education) as well as three Diplomas and a Master in National Defense at the Spanish CESEDEN. Humboldt & Fullbright Fellow, in Ruhr Universität and Stanford, respectively, Dr. Martín Ramírez is also Research Fellow of International Security Program of the Harvard University and Visiting Fellow of the Hoover Institution on War, Revolution and Peace, Stanford University, probably the most important left-leaned and right-leaned American think-tanks, respectively. He also served as Visiting Professor and Research Fellow at universities in Israel, France, Poland, Wales, Australia, Japan, Canada, Iran, Guatemala, Germany, and the USA. Dr. Martín Ramírez has been awarded multiple international honors, such as being several times official of the Boarding Counsel of the International Society for Research on Aggression (ISRA), on the Advisory Board of the Society for Terrorism Research and of the Professors World Peace Academy, and Fellow of the World Academy of Art and Sciences and of the New York Academy of Sciences, as well as a Professional Award on Aggression and Inter-ethnic Conflicts by the East-West Center, established by the United States Congress, among others. Dr. Martín Ramírez is author of about 500 scientific publications, among books and articles, in more than ten languages. He has also been Head of the Complutense Research Group on Sociopsychobiology of Aggression, Head of the Departments of Psychobiology at Seville and Complutense Universities, and Director of the Cabinet of the Rector at the Madrid Autonomous University.

Major General (Ret.) Dr. Jerzy Biziewski performed last duties as director of Plans, Allied Command Operations at Mons, NATO. He is a graduate of the Mechanized Infantry Higher School. He earned his PhD at the National Defense Academy in the military history domain. He attended numerous courses at tactical, operational and strategic level both in the country and abroad (Denmark, Great Britain, the Netherlands, NATO). Biziewski’s assignments include commanding and staff positions in several units and HQs.  He was the commanding officer for the 2nd Corps HQ and the 1st Armored Brigade. He deployed to Afghanistan as the commander of the Polish Military Contingent. He was the chief of Movement and Transportation Branch at Joint Force Command HQ Brunssum, deputy J5 and chief of the Crisis Response Branch at the General Staff (PL). For several years he was a lecturer at the National Defense Academy. Earlier he served as a platoon leader, company commander and battalion commander.

His decorations include the Military Cross (PL), Bronze Star Medal (US), Meritorious Service Medal (US) and various unit and service awards.He is the author of 3 books on wars in the Middle East in years 1973 - 2001, several articles of military nature. He run number of analyses and plans prepared for high ranking military and political decision makers in the country and for NATO HQs.