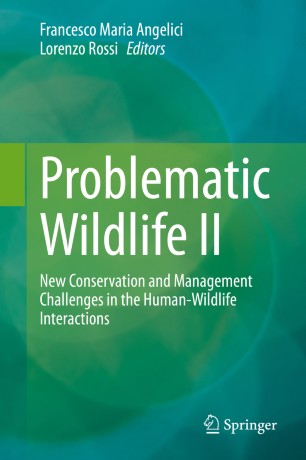 New Conservation and Management Challenges in the Human-Wildlife Interactions

In a world where habitats are constantly changing and the impact of anthropization on the environment is increasingly intense, interactions between human and wildlife are becoming more and more complex. Some species pose problems for human activities while many others need to be helped in order to continue to exist.

This book follows the first volume called 'Problematic Wildlife', edited by F.M. Angelici and published by Springer in 2016, which has had considerable success with readers and critics.

The volume includes 21 chapters divided into 7 parts devoted specific topics which are approached in a multidisciplinary way. There are both review chapters and specific cases, always bearing in mind the interest for an international audience.

The book can be useful both for scientists, wildlife specialists, conservationists, zoologists, ecologists, university students, nature managers, and for those who live in contact with wildlife and its problems, such as farmers, shepherds, hunters, urban planners, and staff of parks and nature reserves.

Its ultimate goal is to offer scientific and pragmatic approaches to manage each categories of problematic species.

Francesco Maria Angelici, PhD, currently works in the areas of biology, behavioral ecology, fauna, zoogeography, and mammal systematic and conservation studies, particularly concerning carnivores, lagomorphs and ungulates. His other fields of research are: ornithology (the biology and ecology of Falconiformes, Passeriformes and Strigiformes) and herpetology (the ecology of snakes and their trophic relationship with mammals). He studies Italian and tropical fauna, with particular reference to the conservation of vertebrates.  He also works in the areas of planning and environmental conservation. In particular, he has worked in the area of wildlife management at national parks, reserves and other protected areas in Italy and abroad. He currently works as a zoologist conservationist, with hunting management agencies. He is also a specialist in African savannah environments as well as desert and tropical rain forests. He is currently the scientific head of an international project dedicated to the conservation of the lion (Panthera leo) in Ghana.  He has published about 220 scientific papers in journals with international committees of reference, in addition to some scientific and popular articles. He has also written several chapters in monographs and books in Italy and abroad, in addition to being the editor of various Italian books. He co-authored the “Checklist of fauna species in Italy, Vertebrates" in the Mammals section, and authored several species sections in the new edition of Fauna d’Italia (Texbook of Italian Mammals), some species sections in Handbuch der Säugetiere Europas (Monograph on the Mammals of Europe), and some species sections in Mammals of Africa  (Bloomsbury Publishing).  He contributes as a referent to 23 international journals, and he is associate editor of two international journals. He was a lecturer in courses in zoology (Vertebrate Zoology, Wildlife Management, Animal Ecology, and Zoogeography) at  Sapienza University of Rome from 1990 to 1996, and at the University of Tuscia, Viterbo from 2007 to 2009. He is a member of seventeen scientific and/or conservation societies in both Italy and abroad, including the IUCN.

Lorenzo Rossi is a science communicator who deals with the history of zoology, ethnozoology and the relationship between science and pseudoscience. For this topics he is the author of exhibits, conferences, books and scientific publications. His most recent works concern the relationship between folklore and the discovery of new species of primates and the morphometric and genetic study of the island population of wolves that became extinct in Sicily (Italy) at the beginning of 1900.  He currently deals with public relations for the Museo dell'Ecologia di Cesena (Italy) and the organisation of events related to citizen science projects.