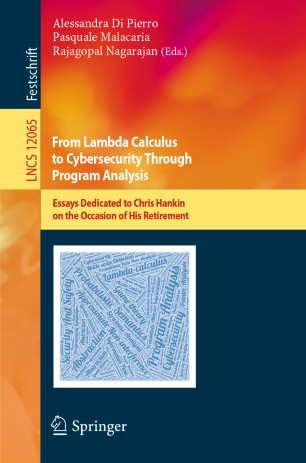 From Lambda Calculus to Cybersecurity Through Program Analysis

Essays Dedicated to Chris Hankin on the Occasion of His Retirement

​This Festschrift celebrates Chris Hankin's career and was written on the occasion of his retirement. The volume collects contributions from colleagues, collaborators, and friends on various research themes that have marked Chris’ career, namely Logic and Type Theory for Programming Languages; Program Analysis and Abstract Interpretation ; and Security, Privacy, and Cybersecurity.
All these are areas in which Chris Hankin has made several important contributions including advances in semantics-based program analysis, probabilistic abstract interpretation, and cybersecurity for industrial control systems. Chris is also well known for co-authoring the book "Principles of Program Analysis", which is a popular reference for researchers and practitioners on static analysis techniques.
He has led the Research Institute in Trustworthy Industrial Control Systems (RITICS) and the Institute for Security Science and Technology at Imperial College and contributed to several government initiatives.