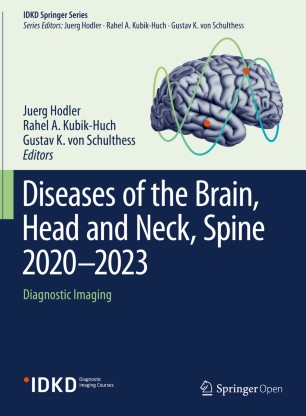 This open access book offers an essential overview of brain, head and neck, and spine imaging. Over the last few years, there have been considerable advances in this area, driven by both clinical and technological developments. Written by leading international experts and teachers, the chapters are disease-oriented and cover all relevant imaging modalities, with a focus on magnetic resonance imaging and computed tomography. The book also includes a synopsis of pediatric imaging.

IDKD books are rewritten (not merely updated) every four years, which means they offer a comprehensive review of the state-of-the-art in imaging. The book is clearly structured and features learning objectives, abstracts, subheadings, tables and take-home points, supported by design elements to help readers navigate the text. It will particularly appeal to general radiologists, radiology residents, and interventional radiologists who want to update their diagnostic expertise, as well as clinicians from other specialties who are interested in imaging for their patient care.

Juerg Hodler has held the positions of Professor of Radiology and Chairman of the Department of Radiology at University Hospital in Zurich, Switzerland since 2010. He has also served as the Chief Medical Officer of the University Hospital in Zurich since 2011. He has published 265 original papers, 64 other publications including review articles, 28 book chapters and four books. Mostly in the field of musculoskeletal imaging, with an emphasis on joint imaging and the spine. He has served as a co-editor of the journal of Skeletal Radiology for nearly a decade. He has been actively involved in a number of committees of scientific societies, including the International Society of Magnetic Resonance in Medicine (ISMRM), the International Skeletal Society (ISS) and the Swiss Society of Radiology (SGR-SSR). He currently serves as the Secretary of the ISS. He has been the President of the Swiss Board’s Examination in Radiology for 11 years and currently is a Co-Director of a CAS Course in Medical Leadership at University of Zurich. He has served as a Co-Director of the International Diagnostic Course in Davos since 2005.

Rahel A. Kubik-Huch is Head of the Institute of Radiology and the Department of Medical Services and a member of the executive board at the Kantonsspital Baden in Switzerland. She has a strong interest in female imaging with expertise in all imaging modalities and imaging-guided minimal invasive breast interventions. She is Deputy Editor of European Radiology and a past President and Honorary Member of the executive board of the Swiss Society of Radiology. She is a course Co-Director of the International Diagnostic Course Davos (IDKD), Course Advisor of the Breast Imaging Satellite Course Pearl of the IDKD and a former organizer of the Advanced Breast and Pelvis Imaging Course of the ESMRMB where she has remained a member of the faculty. She has published numerous research articles in peer-reviewed journals, contributed to several book chapters and has been an invited speaker in her area of expertise at a number of national and international symposia and meetings.

Gustav K. von Schulthess is internationally known as a pioneer of hybrid imaging (PET/CT, SPECT/CT and PET/MR), leader and visionary. He received his MD from Harvard Medical School and his PhD in Physics in 1980 and is doubly board certified in Radiology and Nuclear Medicine, with residence and fellowship trainings in Zurich, St. Gallen and San Francisco. He was the President of the European Society of Magnetic Resonance in Medicine and Biology and an Honorary Member since 1996. He served as President of the Swiss Society of Nuclear Medicine from 1996 to 1999 and 2012 to 2014. He received an honorary degree in Medicine from the University of Copenhagen in 2007 and became Honorary Member of the Radiological Society of North America in 2008. He was the Director of Nuclear Medicine at the University Hospital Zurich (USZ), Switzerland from 1991 until 2014, Chief Medical Officer of USZ from 2005 to 2007 and Department Chair of Medical Radiology from 2011 to 2014. He stepped down from his duties in 2014 and is currently an advisor to Nuclear Medicine at USZ to GE Healthcare and advisor and co-owner of Swiss Nuclides GmbH. Last but not least, he has been one of the Directors of the International Diagnostic Course in Davos (IDKD), Switzerland since 1995, where he helped bring IDKD to Asia and South America.