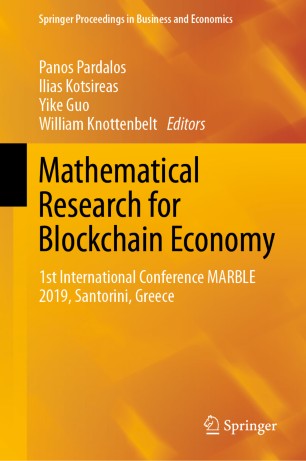 This book presents the best papers from the 1st International Conference on Mathematical Research for Blockchain Economy (MARBLE) 2019, held in Santorini, Greece. While most blockchain conferences and forums are dedicated to business applications, product development or Initial Coin Offering (ICO) launches, this conference focused on the mathematics behind blockchain to bridge the gap between practice and theory.

Every year, thousands of blockchain projects are launched and circulated in the market, and there is a tremendous wealth of blockchain applications, from finance to healthcare, education, media, logistics and more. However, due to theoretical and technical barriers, most of these applications are impractical for use in a real-world business context. The papers in this book reveal the challenges and limitations, such as scalability, latency, privacy and security, and showcase solutions and developments to overcome them.

Dr. Panos Pardalos is a Distinguished Professor  in the Department of Industrial and Systems Engineering at the University of Florida, and an affiliated faculty of Biomedical Engineering and Computer Science  Information & Engineering  departments. In addition, he is the director of the Center for Applied Optimization. Dr. Pardalos is a world renowned leader in Global Optimization, Mathematical Modeling, and Data Sciences. He is a Fellow of AAAS, AIMBE, and INFORMS and was awarded the 2013 Constantin Dr. Panos Pardalos is a Distinguished Professor in the Department of Industrial and Systems Caratheodory Prize of the International Society of Global Optimization. In addition, Dr. Pardalos has been awarded the 2013 EURO Gold Medal prize bestowed by the Association for European Operational Research Societies. This medal is the preeminent European award given to Operations Research (OR) professionals for “scientific contributions that stand the test of time.” Dr. Pardalos has been awarded a prestigious Humboldt Research Award (2018- 2019). The Humboldt Research Award is granted in recognition of a researcher’s entire achievements to date – fundamental discoveries, new theories, insights that have had significant impact on their discipline. Dr. Pardalos is also a Member of several  Academies of Sciences, and he holds several honorary PhD degrees and affiliations. He is the Founding Editor of Optimization Letters, Energy Systems, and Co-Founder of the International Journal of Global Optimization, and Computational Management Science. He has published over 500 journal papers, and edited/authored over 200 books. He is one of the most cited authors and has graduated 63 PhD students so far. Details can be found in www.ise.ufl.edu/pardalos.
Ilias S. Kotsireas serves as a full professor of Computer Science at Wilfrid Laurier University in Waterloo, Ontario, Canada. In 2002 he founded the CARGO Lab, and serves as its director for more than 15 years. He has over 150 refereed journal and conference publications, chapters in books, edited books and special issues of journals, in the research areas of Computational Algebra, Metaheuristics, High-Performance Computing, Dynamical Systems and Combinatorial Design Theory. He serves on the Editorial Board of 7 international journals. He serves as the Managing Editor of a Springer journal and as the Editor-in-Chief of a Springer journal and a Birkhauser book series. He has organized a very large number of international conferences in Europe, North America and Asia, often serving as a Program Committee Chair or General Chair.

Yike Guo is a Professor of Computing Science in the Department of Computing at Imperial College London. He is the founding Director of the Data Science Institute  at Imperial College, as well as leading the Discovery Science Group in the department. Professor Guo also holds the position of CTO of the tranSMART Foundation, a global open source community using and developing data sharing and analytics technology for translational medicine. Professor Guo received a first-class honours degree in Computing Science from Tsinghua University, China, in 1985 and received his PhD in Computational Logic from Imperial College in 1993 under the supervision of Professor John Darlington. He founded InforSense, a software company for life science and health care data analysis, and served as CEO for several years before the company's merger with IDBS, a global advanced R&D software provider, in 2009. He has been working on technology and platforms for scientific data analysis since the mid-1990s, where his research focuses on knowledge discovery, data mining and large-scale data management. He has contributed to numerous major research projects including: the UK EPSRC platform project, Discovery Net; the Wellcome Trust-funded Biological Atlas of Insulin Resistance (BAIR); and the European Commission U-BIOPRED project. He is currently the Principal Investigator of the European Innovative Medicines Initiative (IMI) eTRIKS project, a €23M project that is building a cloud-based informatics platform, in which tranSMART is a core component for clinico-genomic medical research, and co-Investigator of Digital City Exchange, a £5.9M research programme exploring ways to digitally link utilities and services within smart cities. Professor Guo has published over 200 articles, papers and reports. Projects he has contributed to have been internationally recognised, including winning the “Most Innovative Data Intensive Application Award” at the Supercomputing 2002 conference for Discovery Net, and the Bio-IT World "Best Practices Award" for U-BIOPRED in 2014. He is a Senior Member of the IEEE and is a Fellow of the British Computer Society.

William Knottenbelt is Professor of Applied Quantitative Analysis in the Department of Computing at Imperial College, London, UK. His broad area of research interest is the application of mathematical modelling techniques to real life systems. Specific ares of interest include, but are not limited to, modelling and optimisation in parallel queuing systems, modelling of storage systems, stochastic modelling of sport, stochastic modelling of healthcare systems, resource allocation and control in cloud-computing environments,numerical solution of Markov-models and specification techniquesfor SLA specification, compliance prediction and monitoring.