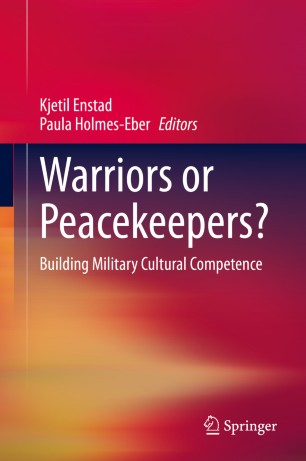 As the past two decades of war in Afghanistan, Syria, Iraq, Darfur and the Congo have revealed, war in the twenty-first century looks nothing like the traditional state-to-state conflicts of World Wars I and II which defined the previous century. Resolving today’s conflicts - typically based on complex ethnic, religious, economic and political dynamics - requires far more than mere military strength and technology. The military officer of today must simultaneously be a warrior and diplomat, combatant and humanitarian worker, soldier and peacekeeper. But how can today’s militaries prepare their leaders for such multifaceted roles?

Warriors or Peacekeepers seeks to provide answers to this question, comparing and contrasting research on the successes and failures of military cultural education and training programs in seven different countries on three continents (U.S., Canada, Argentina Norway, Denmark, Germany and the Netherlands).

This anthology consists of three main sections. The first addresses the theoretical issues of developing the warrior-peacekeeper: what constitutes cultural competence in the officer profession and the pedagogical challenges associated with developing such competence. The second compares teaching practices from various military educational institutions and provides insight into such issues as: how language training can build cultural awareness, helping officers navigate the ethical and moral challenges of dealing with gender in radically different cultures and the best didactic models to develop reflective skills in military leaders. The third section examines the structural and organizational conditions which historically have aided or impeded educational and organizational change in the military.

This book will appeal to military academic communities, educational institutions, scholars in security studies, peacekeeping and conflict studies; and to decision-makers in governments and administration.

Kjetil Enstad initiated and organized the conference in Oslo on which this anthology builds. After finishing his Ph.D. in literature, he has been associate professor in different positions in the Norwegian Military Academy and the Norwegian Defence University College (NDUC). He has been Head of Department in the department of Military Theory, International Relations and Communication, and he has had a brief period as Assistant Dean at the NDUC. He currently teaches cultural awareness and scientific method, and his latest publication is “Teaching professional ethos” in the Journal of Military Ethics, on the implication of Wittgenstein’s philosophy of language for the notion of a professional ethos in the military.

From 2006-2014, Paula Holmes-Eber taught thousands of senior military and governmental leaders about the cultural aspects of conflict and military planning as Professor of Operational Culture at Marine Corps University. During this period, she also built culture policy and training programs and studied their effectiveness at the US Marine Corps Center for Advanced Operational Culture (CAOCL). She is the author of five books and numerous scholarly publications on culture and conflict including:  Culture in Conflict: Irregular Warfare, Culture Policy and the Marine Corps (Stanford University Press, 2014), and the three part handbook series: Operational Culture for the Warfighter—forward by General James Mattis, current US Secretary of Defense (MCU Press, 2009, 2011, 2014).  Dr. Holmes-Eber holds a PhD in anthropology from Northwestern University and a BA in psychology and sociology from Dartmouth College. She is currently Affiliate Professor, Jackson School of International Studies at the University of Washington.