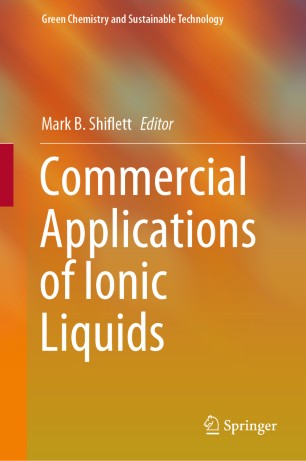 This book provides an overview of the current and emerging industrial applications of ionic liquids, covering the core processes, the practical implementation and technical challenges involved, and exploring potential future directions for research and development.

The introductory chapter describes the unique physical and chemical properties of ionic liquids, and illustrates the vast potential for application of these materials across the industrial landscape. Following this, individual chapters written by leading figures from industry and academia address specific processes and products, such as the development of a new chloroaluminate ionic liquid as an alkylation catalyst and a new class of capillary gas chromatography (GC) columns with stationary phases based on ionic liquids.

Over the past twenty years, ionic liquids have moved from being considered as mere academic curiosities to having genuine applications in fields as wide-ranging as biotechnology, biorefineries, catalysis, pharmaceuticals, renewable fuels, and sustainable energy. This book highlights several commercial products and processes that use or will soon be using ionic liquids.

Mark B. Shiflett is a Foundation Distinguished Professor at the University of Kansas School in the Department of Chemical and Petroleum Engineering and a member of the Center for Environmentally Beneficial Catalysis. He received his Ph.D. and M.S. degrees in Chemical Engineering from the University of Delaware in 2001 and 1998, respectively, and his B.S. degree in Chemical Engineering from N.C. State University in 1989. After 28 years of service, in 2016 he retired from the DuPont Company, where he was a Technical Fellow at the Central Research and Development department at the Experimental Station in Wilmington, Delaware. He was also an Adjunct Professor at the University of Delaware’s Department of Chemical and Biomolecular Engineering. Professor Shiflett holds 44 U.S. patents and has published over 90 articles on his research. He was awarded the DuPont Bolton Carothers Award in 2005, the ACS Hero of Chemistry Award in 2006, and the University of Delaware Presidential Citation in 2007 for his development of hydrofluorocarbon refrigerant mixtures to replace chlorofluorocarbons. In 2014 he was elected as a Fellow of the American Institute of Chemical Engineers, and in 2016 he was made a Division Fellow at the American Chemical Society for his significant professional accomplishments and contributions chemical engineering.

In 2018 he became a member of the National Academy of Inventors. Professor Shiflett received the American Institute of Chemical Engineers Institute Award for Industrial Research in 2016 for the development of non-ozone-depleting refrigerants, new ionic liquid applications, an environmentally friendly TiO2 process and mentoring and educating chemical engineers. Professor Shiflett is a licensed professional engineer in the State of Delaware, and his research at KU focuses on environmentally friendly, energy-efficient processes and products for the chemical industry.