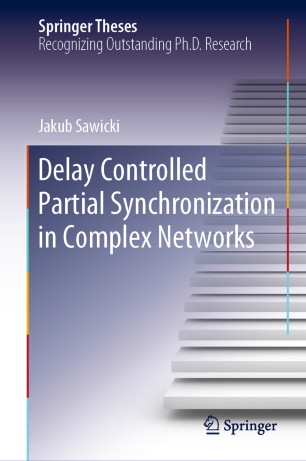 The focus of this thesis are synchronization phenomena in networks and their intrinsic control through time delay, which is ubiquitous in real-world systems ranging from physics and acoustics to neuroscience and engineering. We encounter synchronization everywhere and it can be either a helpful or a detrimental mechanism. In the first part, after a survey of complex nonlinear systems and networks, we show that a seemingly simple system of two organ pipes gives birth to complex bifurcation and synchronization scenarios. Going from a 2-oscillator system to a ring of oscillators, we encounter the intriguing phenomenon of chimera states which are partial synchrony patterns with coexisting domains of synchronized and desynchronized dynamics. For more than a decade scientist have tried to solve the puzzle of this spontaneous symmetry-breaking emerging in networks of identical elements. We provide an analysis of initial conditions and extend our model by the addition of time delay and fractal connectivities. In the second part, we investigate partial synchronization patterns in a neuronal network and explain dynamical asymmetry arising from the hemispheric structure of the human brain. A particular focus is on the novel scenario of partial relay synchronization in multiplex networks. Such networks allow for synchronization of the coherent domains of chimera states via a remote layer, whereas the incoherent domains remain desynchronized. The theoretical framework is demonstrated with different generic models.

Jakub Sawicki is a professional musician and physicist. His research is combining aspects of both fields. He studied music at Listaháskóli Islands University and University of Arts Berlin. Apart from his position as organist at Berlin Cathedral, Jakub Sawicki has deepened his studies of organ improvisation. He has engagements as choir and orchestra conductor and teaches improvisation at University of Arts Berlin. At the same time, he has continued his scientific research and received the Dr. rer. nat. degree from the Technical University Berlin. His research interests include synchronization phenomena in music, nonlinear delay differential equations, modeling of complex systems and neural dynamics.