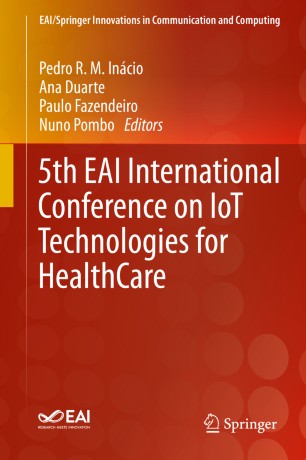 This book presents papers from HealthyIoT 2018, the fifth edition of an international scientific event series dedicated to Internet of Things and Healthcare. The papers discuss leveraging a set of existing and emerging technologies, notions and services that can provide many solutions to delivery of electronic healthcare, patient care, and medical data management. HealthyIoT brings together technology experts, researchers, industry and international authorities contributing towards the design, development and deployment of healthcare solutions based on IoT technologies, standards, and procedures. HealthyIoT 2018 is part of the 4th annual Smart City 360˚Summit, promoting multidisciplinary scientific collaboration to solve complex societal, technological and economic problems of emerging Smart Cities. The event is endorsed by the European Alliance for Innovation, an international professional community-based organisation devoted to the advancement of innovation in the field of ICT.

Pedro Ricardo Morais Inácio has a Ph.D. degree in Computer Science and Engineering, obtained from the Universidade da Beira Interior (UBI), Portugal, in 2005 and 2009 respectively. The Ph.D. work was performed in the enterprise environment of Nokia Siemens Networks Portugal S.A., through a Ph.D. grant from the Portuguese Foundation for Science and Technology. He is a professor of Computer Science at UBI since 2010, where he lectures subjects related with information assurance and security, programming of mobile devices and computer based simulation, to graduate and undergraduate courses, namely to the B.Sc., M.Sc. and Ph.D. programmes in Computer Science and Engineering. He is currently the Head of the Department of Computer Science of UBI. He is an instructor of the UBI Cisco Academy.

Paulo Fazendeiro received the Ph.D. in Computer Science and Engineering (2010) from the University of Beira Interior, Portugal. Currently he is an Assistant Professor at the Informatics Department of the University of Beira Interior. His research interests encompass Computational Intelligence and Granular Computing including the application of fuzzy set theory and fuzzy systems, knowledge discovery and evolutionary algorithms, multi-objective optimization and clustering techniques.

Nuno Pombo holds a Ph.D. in Computer Science and Engineering, and is assistant professor, researcher and senior consultant. His current research interests include: information systems (with special focus on clinical decision support systems), data fusion, artificial intelligence, and software. He is the coordinator of the Ambient Living Computing and Telecommunication Laboratory (ALLAB) at UBI. He is also member of BSAFE Lab, and Instituto de Telecomunicações - IT at UBI. He has around 60 scientific publications including book chapters, full-paper journals; e.g. IEEE Access, Artificial Intelligence in Medicine, Computer Methods and Programs in Biomedicine, Pervasive and Mobile Computing, Measurement, Sensors, and conference proceedings. He has strong experience in R&D and cooperation at European level projects with both academia and industry.