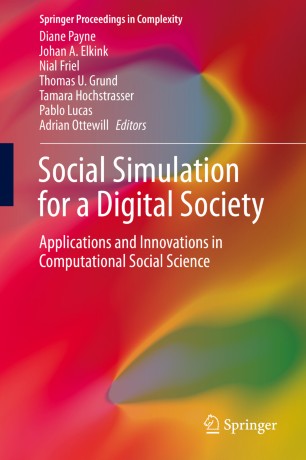 Social Simulation for a Digital Society

Part of the Springer Proceedings in Complexity book series (SPCOM)

“Social Simulation for a Digital Society” provides a cross-section of state-of-the-art research in social simulation and computational social science. With the availability of big data and faster computing power, the social sciences are undergoing a tremendous transformation. Research in computational social sciences has received considerable attention in the last few years, with advances in a wide range of methodologies and applications. Areas of application of computational methods range from the study of opinion and information dynamics in social networks, the formal modeling of resource use, the study of social conflict and cooperation to the development of cognitive models for social simulation and many more. This volume is based on the Social Simulation Conference of 2017 in Dublin and includes applications from across the social sciences, providing the reader with a demonstration of the highly versatile research in social simulation, with a particular focus on public policy relevance in a digital society.  Chapters in the book include contributions to the methodology of simulation-based research, theoretical and philosophical considerations, as well as applied work. This book will appeal to students and researchers in the field.

Johan A. Elkink is Associate Professor in Social Science Research Methods at University College Dublin. He specialises in quantitative methods in political science, in particular simulation-based research and spatial econometrics. Besides applications in voting behaviour in referendums and national elections, he wrote on the international diffusion of democracy and the evolution of personalist regimes. His work appeared, among other outlets, in the Journal of Politics, Comparative Political Studies, European Journal of Political Research and Electoral Studies.

Nial Friel is Professor of Statistics at University College Dublin. His research is broadly focused on statistical network analysis, Bayesian statistics and Monte Carlo methods. He is especially interested in applications at the interface of these areas. He is currently the joint editor of the Journal of the Royal Statistical Society, Series C.

Tamara Hochstrasser is an ecologist. For her doctoral research she has developed an individual-based vegetation model. Since joining University College Dublin in 2003, she has contributed to research on modelling of greenhouse gas emissions from agricultural land, ecosystem services and biodiversity management in urban areas. Tamara is convinced that a transdisciplinary approach is needed for creating an effective evidence-base for decisions making. Some of her theoretical considerations about transdisciplinary research are captured in an agent-based model and in a course manual on knowledge creation at the science-practice interface that she uses for teaching and intends to publish.

Pablo Lucas is a Lecturer at the University College Dublin, Ireland, with research focused on computational social science, particularly experimental designs using agent-based models and data analysis. His education include reading for a Bachelor of Science in Computer Science (BSc) focused on evolutionary networks, a Master of Philosophy (MPhil) and a Doctor of Philosophy(PhD) focused on agent-based (social) simulations using models of social behaviour.

Adrian Ottewill is Full Professor of Mathematical Physics and has been a strong supporter of Computational Social Science research at UCD through his roles as Cluster Leader for Simulation Science of the UCD Complex and Adaptive Systems Laboratory and founding Director of the UCD Institute for Discovery.  Prof Ottewill holds a BA, DPhil and DSc from the University of Oxford and was elected a Member of the Royal Irish Academy in 1997.