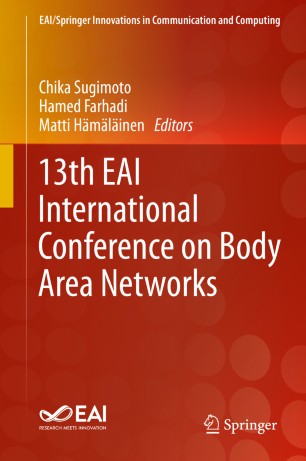 The papers in this proceeding discuss current and future trends in wearable communications and personal health management through the use of wireless body area networks (WBAN). The authors posit new technologies that can provide trustworthy communications mechanisms from the user to medical health databases. The authors discuss not only on-body devices, but also technologies providing information in-body. Also discussed are dependable communications combined with accurate localization and behavior analysis, which will benefit WBAN technology and make the healthcare processes more effective. The papers were presented at the 13th EAI International Conference on Body Area Networks (BODYNETS 2018), Oulu, Finland, 02-03 October 2018.

Chika Sugimoto received the B.S. degree in Engineering, and the M.S. and the Ph.D. degrees in Environment from The University of Tokyo, respectively. During 2006-2010, she was an assistant professor of Graduate school of Frontier Sciences, The University of Tokyo. Since 2010 she is an associate professor of Graduate School of Engineering, Yokohama National University. She is a member of IEEE. Her research fields are human informatics and medical ICT.

Hamed Farhadi is Experienced Researcher at Ericsson Research, Stockholm, Sweden, and Associate Researcher at KTH Royal Institute of Technology. He received his PhD degree from KTH Royal Institute of Technology in 2014. He was a Postdoctoral Research Fellow at Harvard University, USA in 2016, and a Researcher at Chalmers University of Technology, Gothenburg, Sweden in 2015. His research interests mainly lie in statistical signal processing and machine learning for a broad range of applications including wireless healthcare systems, micro-robotic surgery, clinical data analysis, and wireless information networks. He has been the author of several papers, books, and patents on these topics. He has been the recipient of several academic awards including best paper award of IEEE International Conference on Acoustics, Speech and Signal Processing (ICASSP) in 2014. Dr. Farhadi was the co-chair of IEEE International Symposium on Medical Information and Communication Technology (ISMICT) in 2015. He is the Editor of Springer International Journal of Wireless Information Networks since 2015.

Dr. Matti Hämäläinen received his M.Sc. and Dr.Sc. degrees in 1994 and 2006, respectively, from University of Oulu, Oulu, Finland. His research interests are radio channel modelling, UWB systems, wireless body area networks and medical ICT. Currently he works as a University Researcher and Adjunct Professor at Centre for Wireless Communications, University of Oulu, Finland. During 2016-2018 he was an IAS Visiting Professor at Yokohama National University, Yokohama, Japan. He is a member of External Advisory Board of Macquarie University's WiMed Research Centre, Australia; and International Steering Committee of International Symposium on Medical ICT (ISMICT). He is also an active contributor in ETSI TC SmartBAN. He has about 200 international scientific journal and conference publications. He is a co-author of "Wireless UWB Body Area Networks - Using the IEEE802.15.4-2011", Academic Press and co-editor of "UWB: Theory and Applications", Wiley & Sons. He holds one patent. Dr. Hämäläinen is an Associate Editor of IEEE Access and member of the Editorial Board of Annals of Telecommunications. According to Google Scholar, his current H-index is 25. He is also IEEE Senior Member and EAI Community Fellow.