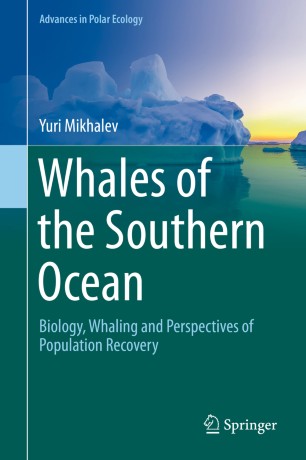 Whales of the Southern Ocean

Based on actual data of Soviet whaling, and reliable methodologies that existed at the time when this monograph was written, it examines the distribution and migration patterns of whales of the Southern Ocean. It defines distinct populations on the basis of phenes, as well as whale breeding zones, which are located in the adjacent to the Southern Ocean waters at lower latitudes. The book records the presence of a new species of killer whale in the Southern Ocean - Orcinus nana. Prenatal growth patterns, pregnancy and lactation duration, mean sizes of new-born whales are determined. Methods for the graphic recording of registering structures are described, and an original method for their decoding is proposed to determine animal age. The age of sexual and physical maturity, life expectancy is determined. Earlier unknown “pair formations” on the lower jaw of baleen whales and sperm whales are described, together with their macro, histological and electronic microscopic structure.

The impact of the extermination of whales on the Southern Ocean ecosystem is examined, recommendations for control of the current state of whale populations are given, and perspectives of whale population recovery are estimated. Regions that could be used as testing areas for whale registration method are defined.

The book is intended for biologist-cytologists, ecologists and other specialists interested in cetaceans, and for biology students.

Yuri Aleskeysvich Mikhalev was graduated from Biological department of Kishinev State University 1963 with major in biologist-zoologist, and was hired as senior scientist in the sea mammal laboratory in Odessa branch of AzCherNIRO.  He took part as a scientific group member in 6 cruises of Soviet whaling fleets “Slava” (1965-66), “Sovetskaya Ukraina” (1964-65), “Yuri Dolgorukiy” (1966-67) and scientific-research vessel “Bodriy-25” (1973-74 and 1974-75).

1970 he became a chief of the mammal laboratory in Odessa branch of AzCherNIRO. He is author of more that 100 papers, most of them were published abroad. His first thesis was about biology of Antarctic fin whale reproduction (Scientific Council of All-union Institute of Sea Fishery and Oceanography, Moscow, 1972). Two doctorate theses were about biology of whales of Southern Hemisphere (specialty “environment protection and rational use of nature resources”, Scientific Council of Institute of Ecology Problems and Evolution, Russian Academy of Science, Moscow, 1997, and “zoology”, Scientific Council of Institute of Zoology, National Academy of Science of Ukraine, Kiev, 2005). He was awarded with 150-years of Antarctica discovery medal for his research of Antarctic cetaceans.

When 1982 the mammal laboratory was closed he started to work as professor of anatomy and physiology department of State Pedagogical University (Odessa, Ukraine). Now he is working in the Institute of Marine Biology of Ukrainian Academy of Science in Odessa.

Since 1994 he is an independent expert of Scientific Committee of International Whaling Commission (IWC), since 1995 he is a member of the Marine Mammal Council (Moscow, Russia).