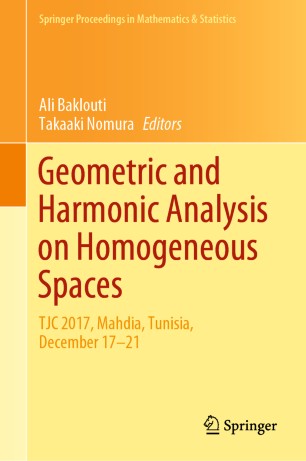 TJC: International Conference on Geometric and Harmonic Analysis on Homogeneous Spaces and Applications

This book presents a number of important contributions focusing on harmonic analysis and representation theory of Lie groups. All were originally presented at the 5th Tunisian–Japanese conference “Geometric and Harmonic Analysis on Homogeneous Spaces and Applications”, which was held at Mahdia in Tunisia from 17 to 21 December 2017 and was dedicated to the memory of the brilliant Tunisian mathematician Majdi Ben Halima. The peer-reviewed contributions selected for publication have been modified and are, without exception, of a standard equivalent to that in leading mathematical periodicals. Highlighting the close links between group representation theory and harmonic analysis on homogeneous spaces and numerous mathematical areas, such as number theory, algebraic geometry, differential geometry, operator algebra, partial differential equations and mathematical physics, the book is intended for researchers and students working in the area of commutative and non-commutative harmonic analysis as well as group representations.

Ali Baklouti is Full Professor of Mathematics at the University of Sfax, Tunisia. He received his PhD in Mathematics from the University of Metz (France) in 1995. Ali Baklouti was elected as the President of the Tunisian Mathematical Society for two consecutive terms (April 2016-March 2019 and April 2019-March 2022, and he has been the Deputy Director of the Mediterranean Institute of Mathematical Sciences since January 2012. He was also nominated as a member of the "Tunisian Academy of Sciences, Letters and Arts: Beit Elhikma" in December 2016. He has published over 70 papers in peer-reviewed national and international journals and proceedings, as well as a number of book chapters. Ali Baklouti is Co-Editor-in-Chief of the Tunisian Journal of Mathematics and an editorial board member for a number of well-known journals. He has delivered several invited talks at national and international conferences.

Takaaki Nomura was a Full Professor of Mathematics at Kyushu University in Japan, and has been a Professor Emeritus since April 2019. He is currently affiliated with Osaka City University, Advanced Mathematical Institute. He has published about 30 original papers in peer-reviewed national and international journals, as well as several survey papers and proceeding articles written both in English and in Japanese. He has written three mathematical books in Japanese, and delivered several invited talks at national and international conferences.