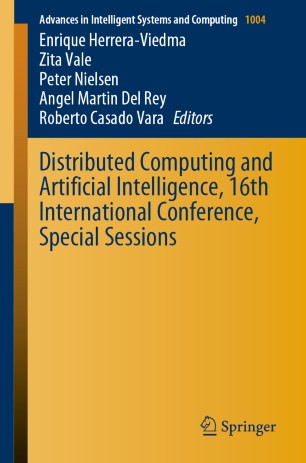 Part of the Advances in Intelligent Systems and Computing book series (AISC, volume 1004)

This book presents the outcomes of the special sessions of the 16th International Conference on Distributed Computing and Artificial Intelligence 2019, a forum that brought together ideas, projects and lessons associated with distributed computing and artificial intelligence, and their applications in various areas.

Artificial intelligence is currently transforming our society. Its application in distributed environments, such as the internet, electronic commerce, environmental monitoring, mobile communications, wireless devices, and distributed computing, to name but a few, is continuously increasing, making it an element of high added value and tremendous potential.

These technologies are changing constantly as a result of the extensive research and technical efforts being pursued at universities and businesses alike. The exchange of ideas between scientists and technicians from both the academic and industrial sectors is essential to facilitating the development of systems that can meet the ever-growing demands of today’s society.

The symposium was jointly organized by the Osaka Institute of Technology and the University of Salamanca. This year’s event was held in Avila, Spain, from 26th to 28th June, 2019. The authors wish to thank the sponsors: the IEEE Systems Man and Cybernetics Society, Spain Section Chapter and the IEEE Spain Section (Technical Co-Sponsor), IBM, Indra, Viewnext, Global Exchange, AEPIA, APPIA and AIR institute.