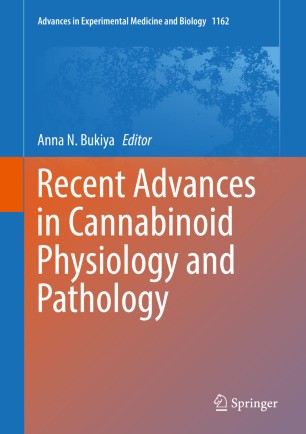 Part of the Advances in Experimental Medicine and Biology book series (AEMB, volume 1162)

This book comprehensively covers modern topics in cannabinoid research and medicinal use. The chapters span topics from the role of endocannabinoid system in embryonic and fetal development to cardiovascular disease, cancer, drug abuse and cutting-edge therapeutic applications.

The content is presented at different levels of resolution. First, following an introduction into cannabinoid system components, readers are immersed into cannabinoid chemistry with a systematic overview of structural data that describe cannabinoid complexes with proteins at the atomic resolution. The remaining chapters capitalize on these interactions. They describe the cannabinoid role during embryonic, fetal, and adolescent development, in the cardiovascular system, cancer progression, and development of alcohol use disorders.  Next, the topic of illicit marijuana use and abuse is discussed with an emphasis on possible genetic factors that may play a role in dependence. The book concludes with the most integrative level. It covers promising pharmacological leads in medicinal use of cannabimimetics to treat pain, epilepsy, and neurodegenerative disorders.

The book brings together contributions from researchers and clinical scientists at different career stages. While some chapters are presented by well-recognized names, others are written by young investigators emerging in the field of cannabinoid research and medicinal use.

The book will be of interest to audiences from biological/chemical disciplines with keen interest in the physiological effects of cannabis. The text quickly introduces the reader to the multi-faceted roles played by endogenous, phyto- and synthetic cannabinoids in health, disease, and modern drug development. Reader will gain insight into the current state of popular but still controversial topic of cannabinoids.

Dr. Anna N. Bukiya, Ph.D., is an Associate Professor at the Department of Pharmacology, College of Medicine, The University of Tennessee Health Science Center. Her scientific interests lie in the field of lipid modulation of ionic currents and cerebral artery sensitivity to drugs of abuse starting from in utero development and spanning into the adulthood. These studies employ an array of computational, biochemical, electrophysiological, and integrative approaches. Dr. Anna Bukiya is a member of Biophysical Society, American Society for Pharmacology and Experimental Therapeutics, Research Society on Alcoholism, and International Drug Abuse Research Society.