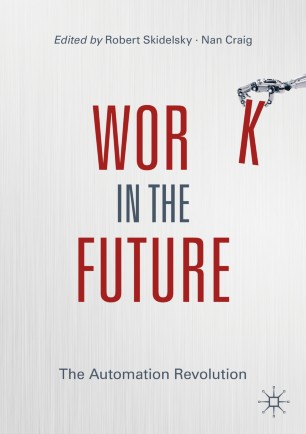 Work in the Future

This short, accessible book seeks to explore the future of work through the views and opinions of a range of expertise, encompassing economic, historical, technological, ethical and anthropological aspects of the debate. The transition to an automated society brings with it new challenges and a consideration for what has happened in the past; the editors of this book carefully steer the reader through future possibilities and policy outcomes, all the while recognising that whilst such a shift to a robotised society will be a gradual process, it is one that requires significant thought and consideration.

Robert Skidelsky is Emeritus Professor of Political Economy at Warwick University, UK and Chair of the Centre for Global Studies, London, UK. His three-volume biography of John Maynard Keynes won five prizes and his book on the financial crisis, Keynes: The Return of the Master, was published in September 2010. He was made a member of the House of Lords in 1991, where he sits on the cross-benches, and was elected as a fellow of the British Academy in 1994. How Much is Enough? The Love of Money and the Case for the Good Life was published in July 2012. His most recent publications were as author of Britain Since 1900: A Success Story? (2014), The Essential Keynes (2015), Markets and Morals (Palgrave Macmillan, 2015), Who Runs the Economy (Palgrave Macmillan, 2016), and Austerity vs. Stimulus (Palgrave Macmillan, 2017).

Nan Craig is Programme Director at the Centre for Global Studies, London, UK. She studied politics and international studies at the University of Warwick, UK, and global politics at the London School of Economics, UK. She co-authored Who Runs the Economy? (Palgrave Macmillan, 2016) with Robert Skidelsky.