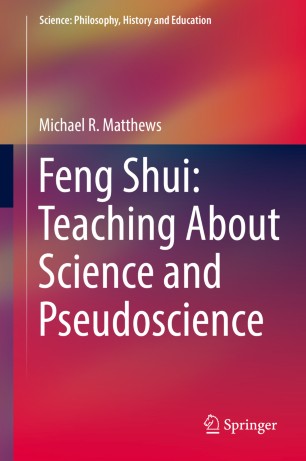 This book provides a richly documented account of the historical, cultural, philosophical and practical dimensions of feng shui. It argues that where feng shui is entrenched educational systems have a responsibility to examine its claims, and that this examination provides opportunities for students to better learn about the key features of the nature of science, the demarcation of science and non-science, the characteristics of pseudoscience, and the engagement of science with culture and worldviews.  The arguments presented for feng shui being a pseudoscience can be marshalled when considering a whole range of comparable beliefs and the educational benefit of their appraisal.

Feng shui is a deeply-entrenched, three-millennia-old system of Asian beliefs and practices about nature, architecture, health, and divination that has garnered a growing presence outside of Asia. It is part of a comprehensive and ancient worldview built around belief in chi (qi) the putative universal energy or life-force that animates all existence, the cosmos, the solar system, the earth, and human bodies. Harmonious living requires building in accord with local chi streams; good health requires replenishment and manipulation of internal chi flow; and a beneficent afterlife is enhanced when buried in conformity with chi directions. Traditional Chinese Medicine is based on the proper manipulation of internal chi by acupuncture, tai-chi and qigong exercise, and herbal dietary supplements.

Matthews has produced another tour de force that will repay close study by students, scientists, and all those concerned to understand science, culture, and the science/culture nexus.

With great erudition and even greater fluidity of style, Matthews introduces us to this now-world-wide belief system.

The book is one of the best research works published on Feng Shui.

The history is fascinating.  The analysis makes an important contribution to science literature.

This book provides an in-depth study of Feng Shui in different periods, considering its philosophical, historical and educational dimensions; especially from a perspective of the ‘demarcation problem’ between science and pseudoscience.

“This book is a tour de force. Its careful and wide-ranging scholarship makes it an essential text across the fields of history, philosophy, and sociology of science as well as science education. It should be read by all academics undertaking research on qi-based knowledge systems, especially TCM. It is also hoped that the present-day practitioners of such systems take Matthews’ arguments into consideration.” (Michael John Paton, Science & Education, Vol. 30, 2021)