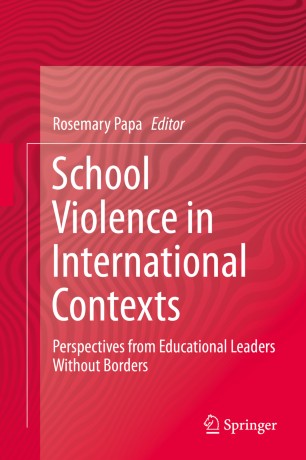 Perspectives from Educational Leaders Without Borders

This international edited volume is a rare look at cultural, economic and political forces that contribute to school violence. In light of the devastating events in US schools and the violence towards students and schools world-wide, the war on knowledge development in non/secular education is increasing at an alarming rate. This book offers an international perspective on violence from both K-12 to tertiary levels, parents, administrators/teachers/support staff, and research scholars in a desire to understand the contextual issues surrounding violence and its impacts on the field of education. ELWB Scholars and practitioners hailing from six continents propose historical to futuristic perspectives linking violence towards education and its inhabitants, while framing future strategies to alter multinational fear mongering to the decline of knowledge generation for an informed citizenry.

Dr. Rosemary Papa is currently a Professor of Comparative & International Education and Leadership at Soka University in Aliso Viejo, CA, USA. Prior to this position, she served as The Del and Jewel Lewis Endowed Chair in Learning Centered Leadership and Professor of Education Leadership in the College of Education at Northern Arizona University- a position she had held since 2007. She has been an active member of the National Council of Professors of Educational Administration (NCPEA) since her first summer conference, Chadron Nebraska, in 1987. In 1991-92, she served as the first female President of NCPEA and was the 2003 recipient of the NCPEA Living Legend Award. In 2000 she founded and serves as Editor of the eJEP: Journal of Education Policy, one of the first open access, free, blind-peer reviewed journals in the world. In 2004, she was the recipient of the Outstanding Teacher Award from the College of Education at California State University, Sacramento. Her record of publications includes thirteen books, numerous book chapters, monographs and over eighty referred journal articles.