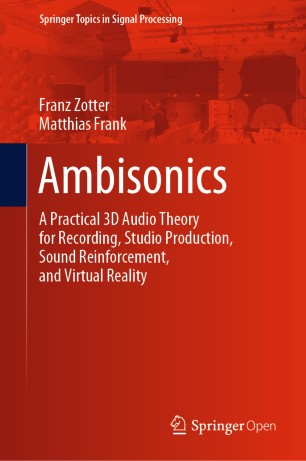 This open access book provides a concise explanation of the fundamentals and background of the surround sound recording and playback technology Ambisonics. It equips readers with the psychoacoustical, signal processing, acoustical, and mathematical knowledge needed to understand the inner workings of modern processing utilities, special equipment for recording, manipulation, and reproduction in the higher-order Ambisonic format. The book comes with various practical examples based on free software tools and open scientific data for reproducible research.

The book’s introductory section offers a perspective on Ambisonics spanning from the origins of coincident recordings in the 1930s to the Ambisonic concepts of the 1970s, as well as classical ways of applying Ambisonics in first-order coincident sound scene recording and reproduction that have been practiced since the 1980s. As, from time to time, the underlying mathematics become quite involved, but should be comprehensive without sacrificing readability, the book includes an extensive mathematical appendix. The book offers readers a deeper understanding of Ambisonic technologies, and will especially benefit scientists, audio-system and audio-recording engineers.

In the advanced sections of the book, fundamentals and modern techniques as higher-order Ambisonic decoding, 3D audio effects, and higher-order recording are explained. Those techniques are shown to be suitable to supply audience areas ranging from studio-sized to hundreds of listeners, or headphone-based playback, regardless whether it is live, interactive, or studio-produced 3D audio material.

Franz Zotter studied Electrical and Audio Engineering at the University  of Technology and University of Music and Performing Arts in Graz, Austria. By the time receiving his diploma in 2004, he had the opportunity to join the Institute of Electronic Music and Acoustics as a researcher, later on also lecturer. In 2009, he finished his Ph.D. dealing with the topic of spherical arrays for sound radiation analysis and synthesis, and he was awarded the Lothar-Cremer medal by the German Acoustical Society (DEGA) in 2012 for the work on this topic and Ambisonics, and he became tenuring assistant professor in 2019. He is a member of the DEGA, chairs the DEGA TC on virtual acoustics, he is a member of the Audio Engineering Society (AES), and the society of German Tonmeisters (VDT).

Matthias Frank studied Electrical and Audio Engineering at the University of Technology and the University of Music and Performing Arts in Graz, Austria. After receiving his diploma in 2009, he joined the Institute of Electronic Music and Acoustics in Graz as a researcher and lecturer. In 2013, he finished his Ph.D. on the spatial and timbral properties of auditory objects created by multiple loudspeakers and models thereof, in particular considering Ambisonics. He is a member of the Audio Engineering Society (AES) and the German Acoustical Society (DEGA), and the society of German Tonmeisters (VDT).

“The subject will doubtless continue to fascinate scientists and engineers for some years to come.” (Philip Nelson, Physics Today, June, 2020)