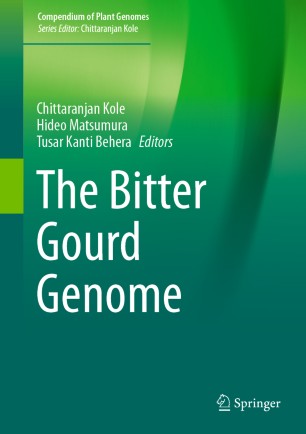 This book focusing on the bitter gourd genome is the first comprehensive compilation of knowledge on the botany, cytogenetical analysis, genetic resources and diversity, traditional breeding, tissue culture and genetic transformation, whole genome sequencing and comparative genomics in the Cucurbitaceae family. It discusses the biochemical profile of the bioactives present in this horticultural crop, used both as a vegetable and as a medicine, and also addresses sex determination in bitter gourd. Written by respected international experts, the book is useful to students, teachers and scientists in academia, as well as seed companies and pharmaceutical industries.

Prof. Chittaranjan Kole is an internationally reputed scientist with an illustrious professional career spanning over thirty-four years and original contributions in the fields of plant genomics, biotechnology and molecular breeding leading to the publication of more than 160 quality research articles and reviews. He has edited over 100 books for the leading publishers of the world including Springer, Wiley-Blackwell and Taylor and Francis Group. His scientific contributions and editing acumen have been appreciated by seven Nobel Laureates including Profs. Norman Borlaug, Arthur Kornberg, Werner Arber, Phillip Sharp, Günter Blobel, Lee Hartwell and Roger Kornberg. He has been honored with a number of Fellowships, Honorary Fellowships, and national and international awards including the Outstanding Crop Scientist award conferred by the International Crop Science Society, and Honorary Fellowship and Distinguished Professorship conferred by the Henan Academy of Agricultural Sciences, China. He has served at all prestigious positions in academia including as Vice-Chancellor BC Agricultural university, Project Coordinator of Indo-Russian Center of Biotechnology in India, and Director of Research of Institute of Nutraceutical Research of Clemson University, in USA. He worked also in the Pennsylvania State University and Clemson University as Visiting Professor in USA. Prof. Kole is now working at the ICAR-National Research Center on Plant Biotechnology, New Delhi with the Raja Ramanna Fellowship awarded by the Department of Atomic Energy, Government of India. He is also heading the International Climate-Resilient Crop Genomics Consortium and International consortium for Phytomedomics and Nutriomics as their founding Principal Coordinator.
Dr. Hideo Matsumura is the well-experienced research scientist with research achievements in plant genomics, functional genomics and genetics field. His research findings were published in more than 50 international journals, including top-ranked journals like several Nature journals or Proceeding of National Academy of Science USA. He worked in Iwate biotechnology Research Center as a senior researcher and was an excellent expert of technical development in genomics. One of his developed methods, SuperSAGE, as a tag-based gene expression profiling tool, was patented in the world. In SuperSAGE development and application study, he internationally collaborated with many researchers in the world.  He has employed Next Generation Sequencing (NGS) technology from early stage of its emergence and demonstrated its great impact to plant genomics. In this field, he also collaborated with illumina, the leading company of NGS. Now, he is an associate professor of Gene Research Center in Shinshu Univ. as a principal investigator. Recently, he has great interests in genomics and sex determination of non-model crops, particularly tropical vegetables or fruits, and his group succeeded in revealing draft genome sequence of bitter gourd for the first time.
Dr. Tusar Kanti Behera is an experienced in vegetable breeding for 20 years and is presently working as Professor at Indian Agricultural Research Institute, New Delhi. He bred 16 varieties/hybrids in different vegetable crops and isolated gynoecious lines in bitter gourd from its feral form, Momordica charantia var muricata (small fruited type). He is working mostly in genetics and molecular breeding of bitter gourd and cucumber. The gynoeciuos gene (gy-1) has been transferred to back ground of the commercial cultivars of India. The phylogenetic relationship among 6 Indian Momordica spp has been studied by using cyto-taxonomy and molecular markers. Performed marker assisted selection (MAS) for yield and quality improvement in cucumber.  Identified molecular markers linked to resistance gene for Tomato Leaf Curl New Delhi Virus in sponge gourd and gynoecious trait in bitter gourd. He developed Indian gynoecious cucumber lines using MAS. Awarded with several prestigious awards including Fulbright-Nehru Academic and Professional Excellence Fellowship, Hooker Award, FAO International Consultant and Fellow of National Academy of Agricultural Sciences, India. He worked also in the University of Wisconsin, Madison, USA as Visiting Scientist. He published his research work in more than 40 research papers in international journals including Plant Physiology and Theoretical and Applied Genetics and edited 3 books. He has guided 14 Post Graduate students for their thesis dissertations at Indian Agricultural Research Institute, New Delhi, India.