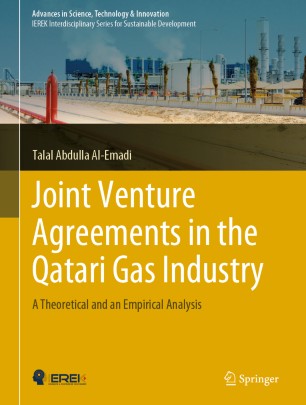 A Theoretical and an Empirical Analysis

This book addresses a question of importance for both theory and practice: Why are joint venture agreements preferred over other types of agreements such as concession agreements, service contracts, and production sharing agreements in the Qatari gas industry?

On a theoretical level, the author analyses this decision-making process by developing an approach that integrates a micro-level analysis, more specifically within international oil companies, with a macro-level analysis that spring from the organisational culture of the Qatari gas industry. At the micro level, the author proposes John Dunning’s eclectic paradigm (as one set of theoretical ideas) to explaining one element of the decision-making process leading to the preference for joint venture agreements, that is, that of international oil companies. At the macro-level, the author proposes Antony Giddens’ structuration theory (as another set of theoretical ideas) to explaining another part of this decision-making process, that is, how it is being shaped by the organisational culture of the Qatari gas industry. On an empirical level, the proposed book applies a combination of a micro-economic approach such as Dunning’s eclectic paradigm with a macro-sociological approach such as Giddens’ structuration theory by empirical investigation. Grounded on a qualitative strategy that focuses on the meaning-making which brings together different perspectives of this decision-making process including those of international oil companies and the organisational culture of the Qatari gas industry, the proposed book utilises a case study design, named the case of the Qatari gas industry. The author employs a triangulation of data collection techniques to access empirical data: analysing official documents and semi-structured interviews (a sample of the interview questions are included in an appendix to the proposed books). In line with the qualitative nature of this proposed book, a thematic Analysis is adopted to interpret data based on Dunning’s eclectic paradigm at the micro level and Giddens’ structuration theory at the macro level. In doing so, this book connects theory with practice by investigating the preference for joint venture agreements in the case of the Qatari industry by the combined application of one of the most effective frameworks for explaining foreign direct investment, named Dunning’s eclectic paradigm along with the most complex sociological framework that offers a rich definition of organisational culture, named Giddens’ structuration theory.

Audience could include academics, professionals, and graduate and senior undergraduate students.