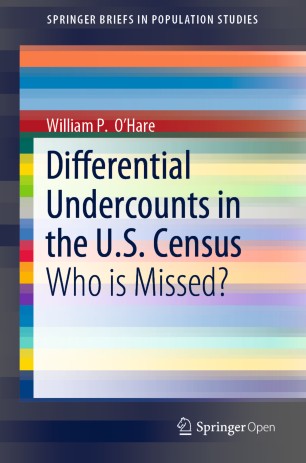 Differential Undercounts in the U.S. Census

This open access book describes the differences in US census coverage, also referred to as “differential undercount”, by showing which groups have the highest net undercounts and which groups have the greatest undercount differentials, and discusses why such undercounts occur. In addition to focusing on measuring census coverage for several demographic characteristics, including age, gender, race, Hispanic origin status, and tenure, it also considers several of the main hard-to-count populations, such as immigrants, the homeless, the LBGT community, children in foster care, and the disabled. However, given the dearth of accurate undercount data for these groups, they are covered less comprehensively than those demographic groups for which there is reliable undercount data from the Census Bureau. This book is of interest to demographers, statisticians, survey methodologists, and all those interested in census coverage.

Dr. O’Hare is a social demographer who has spent forty years using data to increase public understanding disadvantaged groups. For the past 25 years, he has been involved in the KIDS COUNT project at the Annie E. Casey Foundation. He has been an expert witness in more than a dozen lawsuits and has testified before Congress several times. Most of his professional writing has been for public rather than scholarly audiences, and he has been quoted in numerous newspapers, including the New York Times, The Washington Post, USA TODAY and many other newspapers. He has a Bachelor of Science, Master of Arts, and a Ph.D. from Michigan State University.