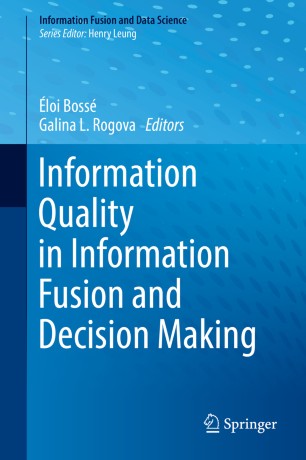 This book presents a contemporary view of the role of information quality in information fusion and decision making, and provides a formal foundation and the implementation strategies required for dealing with insufficient information quality in building fusion systems for decision making. Information fusion is the process of gathering, processing, and combining large amounts of information from multiple and diverse sources, including physical sensors to human intelligence reports and social media. That data and information may be unreliable, of low fidelity, insufficient resolution, contradictory, fake and/or redundant. Sources may provide unverified reports obtained from other sources resulting in correlations and biases. The success of the fusion processing depends on how well knowledge produced by the processing chain represents reality, which in turn depends on how adequate data are, how good and adequate are the models used, and how accurate, appropriate or applicable prior and contextual knowledge is.

By offering contributions by leading experts, this book provides an unparalleled understanding of the problem of information quality in information fusion and decision-making for researchers and professionals in the field.

Éloi Bossé received the B.A.Sc., M.Sc., and Ph.D. degrees from Université Laval, Québec City, QC, Canada, in 1979, 1981, and 1990, respectively, all in electrical engineering. In 1981, he joined the Communications Research Centre, Ottawa, ON, Canada, doing research on signal processing and high-resolution spectral analysis. In 1988, he was transferred to the Defence Research Establishment, Ottawa, to research radar target tracking in multipath. In 1992, he moved to Defence Research and Development Canada Valcartier (DRDC Valcartier), Courcelette, QC, Canada, to lead a group of 4–5 Defence Scientists on information fusion and decision support. Since 1993, he has held Adjunct Professor positions with several universities, such as Université Laval (Québec, CA), the University of Calgary (Alberta, CA), Canada, and McMaster University, (Ontario, CA). He headed the Command & Control Decision Support Systems Section at DRDC Valcartier, from 1998 to his retirement in 2011. Dr. Bossé represented Canada (as a DRDC Member) in numerous international research fora under the various cooperation research programs (NATO, TTCP, and bi and bi- and trilaterals) in his area of expertise. Since 2011, he has been conducting some research activities under NATO Peace and Security Programme, as a Researcher with the Mathematics and Industrial Engineering Department, Polytechnic of Montreal, Montreal, QC, Canada, with the Department of Computer and Electrical Engineering Department at McMaster University and finally, as an Associate Researcher with IMT-Atlantique, Plouzané, France (since 2010). In 2015, he founded  Expertise Parafuse Inc., in Québec city, a consultant ﬁrm on Analytics and Information Fusion Technologies. He has published over 200 papers in journals, book chapters, conference proceedings, and technical reports. He has coauthored and coedited 4–5 books on information fusion.

Galina Rogova received her MSc and PhD in Moscow, Russia. She is a research professor at the State University of New York at Buffalo. She is recognized internationally as an expert in information fusion, machine learning, decision making under uncertainty, and information quality, and has lectured extensively on these topics. Dr. Rogova has worked on a wide range of defense and non-defense applications such as situation and threat assessment, understanding of volcanic eruption patterns, computer-aided diagnosis, and intelligent transportation system, among others. Her research was funded by multiple government agencies as well as commercial companies. She has published numerous papers and co-edited 7 books on information fusion and decision making.